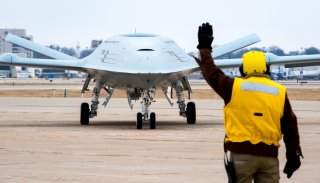 Here's What You Need To Remember: If the Navy doesn't enhance its carrier wings, it risks the wings -- and, by extension, the carriers -- losing relevance, the study warned. "If the Navy is unable to trans­form its CVWs, Navy leaders should reconsider whether to continue investing in carrier aviation or shift the fleet’s resources to more relevant capabilities."

The U.S. Navy revealed, apparently on accident, its plan for rushing into service a new refueling and surveillance drone for carrier air wings.

The sailing branch on Aug. 30, 2019 briefly posted to the website of its Tester magazine an update on the development of the Boeing-made MQ-25 Stingray drone.

Tester is the official magazine of the testing community at Naval Air Station Patuxent River in Maryland.

According to the update, the Navy plans simultaneously to test the MQ-25 air vehicle and a special control station that requires just one aircrew.

Testing of the Unmanned Carrier Aircraft Mission Control Station, or UMCS, “is planned for late fiscal year 2019, where the control station will be connected to Space and Naval Warfare Systems Command labs around the country to test the UMCS interaction with the networks necessary to control the MQ-25A wherever it may operate,” the update stated.

The Navy pulled the update from the Tester website just a few hours after it appeared. The self-censorship underscores the sensitivity of the MQ-25’s development and the fleet’s urgency in developing a new tanker drone.

Boeing built one MQ-25 demonstrator, borrowing design concepts from several previous aircraft in order to maximize the MQ-25’s stealthiness and potential for growth. The Stingray in the future could evolve into a strike aircraft.

The Chicago plane-maker beat several competitors, including Lockheed Martin and General Atomics, and in late 2018 won a nearly $1-billion contract to begin developing the MQ-25. The Navy anticipates acquiring around 70 Stingrays in order to equip all 11 of its aircraft carriers.

A full prototype of the MQ-25 should begin flying in 2019, according to the Tester update. That air vehicle will join test squadron VX-23 at Patuxent River “in late 2021 to support an aggressive three-year test program to enable a 2024 initial operating capability.”

The Navy badly needs the Stingray’s tanking capability. The fleet’s carrier air wings currently lack the range to win in battle with Chinese and Russian forces, according to one study.

The nine front-line wings "lack the range, endurance, survivability and specialization to carry out the operational concepts needed to defeat great-power militaries," the Washington, D.C.-based Center for Strategic and Budgetary Assessments warned in its December 2018 report "Regaining the High Ground at Sea."

The air wings changed as the world did, the CSBA report explained. "Following the Soviet Union’s dissolution in 1991, the Navy faced a situation it had not encoun­tered since the birth of naval aviation: the lack of a peer competitor.”

The shift toward F/A-18s and the retirement of the S-3 shrank the distance at which the air wings could strike targets. By 2018 the range of a typical carrier combat plane with a nine-ton payload had shrunk to just 1,300 miles. Meanwhile, Russia and China were developing longer-range anti-ship missiles and other weapons capable of threatening a carrier and its planes.

The think tank proposed adding a theoretical new long-range fighter it called the “FA-XX” plus unmanned combat air vehicles to the air wings before 2040. "The addition of long-range UCAVs and FA-XX fighters would increase the average range of combat aircraft in the CVW." MQ-25 tankers would further extend the wings’ fighting range.

Changes to the carrier air wings comes at a cost, of course. The MQ-25 program alone could cost $13 billion. But the cost should be worth it.

"The proposed 2040 CVW will cost more than Navy’s planned CVW, but the Navy may have no choice but to incur these additional costs or decide to relegate carrier aviation to a niche capa­bility dedicated to permissive operations against less stressing threats," the CSBA study stated. The Pentagon could free up some money for new aircraft by reducing the number of wings to eight, it advised.

With MQ-25 development speeding along toward a 2024 entry-into-service, major changes are coming fast for the carrier wings. Changes that could rescue them from irrelevance.