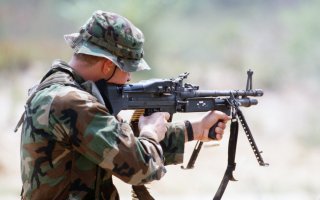 Here's What You Need to Know: The M60 has come a long way from its Vietnam-era iteration.

Another big problem was with the quick change barrel. Since the bipod was on the barrel on the original M60, replacing the barrel meant the gun had to be dismounted from a firing position, maneuvered into a position to accept a fresh barrel, and remounted. This was far harder than the original MG42 barrel change.