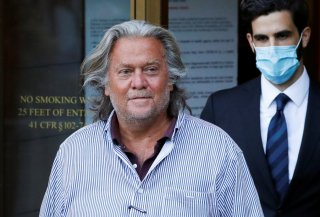 Editor’s note: Federal prosecutors in New York have arrested former senior Trump adviser Steve Bannon and three other men, and charged them with allegedly defrauding hundreds of thousands of donors to an online fundraising campaign to build portions of wall along the U.S. border with Mexico. Lloyd Hitoshi Mayer, a University of Notre Dame law professor who researches nonprofits, explains what’s going on and what the consequences could be.

1. Who is accused of what, exactly?

Audrey Strauss, the acting U.S. attorney for the Southern District of New York, has accused Bannon and the founder of the “We Build the Wall” crowdfunding campaign, Brian Kolfage, of lying to donors about how their gifts would be used. Two other men, Andrew Badolato and Timothy Shea, are also accused of participating in this alleged scheme.

Kolfage launched the GoFundMe campaign in 2018, originally calling it “We the People Build the Wall.” With Shea’s help, he sought to raise a US$1 billion to support the Trump administration’s effort to build a wall on the Mexican border. But when the campaign only raised around $20 million and it turned out the government could not legally accept the funds, GoFundMe insisted that the funds be returned to about 325,000 donors. In response, Kolfage launched We Build the Wall, Inc., a nonprofit, to receive and use the donations.

To convince donors to redirect their gifts, Kolfage promised that the funds would go “toward wall construction only.” The indictment alleges that Bannon and Badolato helped Kolfage set up the new nonprofit, and that all four defendants told donors that if they agreed to redirect their gifts to the nonprofit “100% of the funds raised” would be used to construct the wall and that no one would be compensated for work tied to this effort. Most donors agreed to shift their money.

But the nonprofit, the authorities determined, paid Kolfage an initial salary of $100,000 in February 2019, followed by monthly payments of $20,000. All told, Kolfage received $350,000 in compensation he spent on personal expenses, including boat payments, home renovations and a SUV. The nonprofit also paid for hundreds of thousands of dollars of personal expenses for Bannon, Badolato and Shea. To hide these transfers, the four defendants allegedly funneled money through another nonprofit, a for-profit shell company under Kolfage’s control and accounts controlled by unnamed associates using “fake invoices,” according to the indictment.

The defendants stand accused of lying to obtain money using electronic communications (wire fraud) and the U.S. Postal Service (mail fraud). They also stand accused of money laundering, that is transferring funds to conceal criminal activity. Strauss brought the charges because at least some of the actions occurred in New York.

Bannon pleaded not guilty and will remain in Washington, D.C. on a $5 million bond while awaiting trial.

Nonprofits may legally pay their leaders. What the defendants did wrong was lie to donors about whether Kolfage would be paid and how the funds would be used. But of course without those lies, it’s hard to know how many donors would have agreed to transfer their gifts to the nonprofit.

Bannon is a former senior adviser to President Donald Trump, making this a high-profile case with potential ramifications for the Republican Party.

Several prominent Republicans have supported We Build the Wall. For example, Donald J. Trump Jr. spoke at a fundraiser and former Kansas Secretary of State Kris Kobach serves as the group’s general counsel and sits on its advisory board, along with Erik Prince – a major Trump campaign donor who founded the controversial security company formerly known as Blackwater and whose sister is Education Secretary Betsy DeVos. The indictment didn’t name Prince, Kobach or Donald Trump Jr.

The allegations also fit into a larger pattern of Bannon’s questionable use of nonprofits. In April 2020, Bannon faced questions about his co-founding of two nonprofits with Guo Wengui, a fugitive Chinese billionaire. Bannon was aboard Guo’s yacht off the Connecticut coastline when federal agents arrested him.

3. How has President Trump responded?

Asked about Bannon’s arrest shortly after it occurred, Trump called it “a very sad thing” but stressed that he had not been dealing with his former adviser “for a very long period of time.” The White House also issued a statement that claimed Trump “does not know the people involved with this project,” which was immediately contradicted by media reports and other evidence.

4. What are some of the potential consequences?

The federal charges could lead to prison sentences of up to 20 years and fines in the hundreds of thousands of dollars. On top of these penalties, the defendants may have to repay the fraudulently obtained funds to their donors.

It is also unclear what the future holds for We Build the Wall, especially with the arrest of its leaders. It has funded various private wall-building efforts, but those have run into structural and legal challenges. Prosecutors have asked for funds in various We Build the Wall bank accounts to be forfeited, which could leave the group without the means to continue operating.