Strategic Clarity vs Dual Deterrence on Taiwan is a False Dichotomy 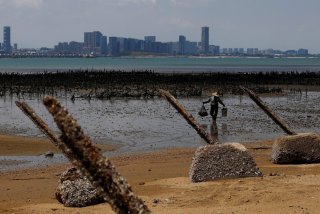 As Joe Biden’s inauguration approaches, debate about the US’s China policy is intensifying. At issue are the traditional pillars of strategy ambiguity and dual deterrence. Strategic ambiguity means that the US reserves the right to assist Taiwan militarily in the event of a conflict with China but does not commit itself to doing so. Dual deterrence means that the US doesn’t only seek to deter China from an unprovoked attack on Taiwan; it also seeks to deter Taiwan from provoking an avoidable conflict by declaring independence.

Biden has endorsed both pillars in the past. In a 2001 Washington Post op-ed, he wrote that while he remained a strong supporter of Taiwan, ‘The United States has not been obligated to defend Taiwan since we abrogated the 1954 Mutual Defense Treaty’. He also stressed that ‘there is a huge difference between reserving the right to use force and obligating ourselves, a priori, to come to the defense of Taiwan’.

Yet a growing number of commentators and policymakers argue that China’s power is now so great, and its ambitions so extensive, that the US should move away from strategic ambiguity and towards what Richard Haass and David Sacks described in Foreign Affairs as ‘strategic clarity’. In short, they suggest that to better deter China the US should make an unequivocal public commitment to aid Taiwan in any conflict.

At the heart of this debate, though, lies a mistake that threatens to blind the US to its options and, in doing so, could lead to a stance that increases the risk of conflict.

Both critics and defenders of strategic ambiguity tend to assume that it is required for dual deterrence, and thus that, regrettable as it may be, moving away from strategic ambiguity will mean giving up on dual deterrence. It is only the prospect that the US might assist Taiwan, in other words, that can deter China while simultaneously deterring Taiwan. This is why critics of strategic ambiguity like Haass and Sacks feel the need to stress that ‘deterring Taiwan from declaring independence is no longer a primary concern’, while defenders like Walter Lohman and Frank Jannuzi stress the opposite.

In reality, however, this assumption is false. It would be possible for the US to move away from strategic ambiguity without giving up on dual deterrence.

Suppose that, instead of maintaining an ambiguous stance, the US were to make two unequivocal, but conditional, public guarantees: first, to aid Taiwan in the event it were subject to an unprovoked attack, and second, to not aid Taiwan in the event it were to provoke a conflict by declaring independence. In this case, the US would shift away from strategic ambiguity without sacrificing dual deterrence. And it would better deter China from naked aggression without reducing the incentive Taiwan has not to spark an avoidable conflict. Indeed, it may increase this incentive.

It’s not surprising that people conflate strategic ambiguity with dual deterrence, because a certain kind of ambiguity can magnify deterrence. In the right circumstances, adopting a retaliatory stance without saying what would actually trigger retaliation can get your adversary to second-guess their every move. Drawing a clear line in the sand, in contrast, gives them the green light to do everything they can short of crossing that line. To give a well-known illustration, it’s sometimes thought that US Secretary of State Dean Acheson effectively gave a green light to North Korean leader Kim Il-sung to start the Korean War by making a speech in January 1950 that delineated a US ‘defensive perimeter’ that excluded South Korea.

These are not the circumstances in the Taiwan Strait, however. As such, a shift away from strategic ambiguity without a movement away from dual deterrence is not just possible, but advisable.

For one thing, it would be grossly disproportionate—not to mention illegal—for the US to use military force in response to merely diplomatic or economic pressure on Taiwan. As a consequence, a threat to use such force would lack credibility at the best of times—indeed, even if it were plainly stated. It’s no surprise, then, that China is already doing everything it can short of using military force to bring Taiwan back within the fold. There’s thus little that could be gained from strategic ambiguity on this front.

Further, the balance of effective military power in the Taiwan Strait may have shifted so far away from the US that, rather than inducing policy paralysis, strategic ambiguity merely gives China the impression that the US wants to be in a position to save face were it not to aid Taiwan. As the doyen of strategic studies, Thomas Schelling, put it in his 1966 book Arms and influence, when our stance is ‘ill-defined and ambiguous—if we leave ourselves loopholes through which to exit—our opponent will expect us to be under strong temptation to make a graceful exit (or even a somewhat graceless one)’. At this point, in other words, strategic ambiguity threatens to undercut rather than magnify deterrence.

Of course, it might be thought that for the US to positively commit to not assist Taiwan were it to declare independence takes things one step too far. Mightn’t China interpret this as indicating that the US doesn’t recognise the many advantages to retaining Taiwan that are impervious to any such provocation, thereby leading China to downrate US resolve still further? At the very least, wouldn’t such a stance incentivise China to interfere in Taiwanese politics in an attempt to engineer such a declaration?

Yet the US could still better deter China without making such a commitment, namely by moving away from strategic ambiguity vis-à-vis China while retaining it vis-à-vis Taiwan. In other words, the US could make an unequivocal public guarantee to aid Taiwan in the event of an unprovoked attack while reserving the right to aid Taiwan in the event of a conflict sparked by a declaration of independence.

At this stage, the smart money is on the Biden administration retaining strategic ambiguity. But it would a great pity, to put it mildly, if this were done under the false impression that anything else would mean ‘ced[ing] to Taiwan … the ability automatically to draw us into a war across the Taiwan Strait’, as Biden himself put it in 2001. Two decades later, the challenge of the Taiwan issue calls for a far more careful analysis than that.