Strategic Competition Won’t Save the United States and China 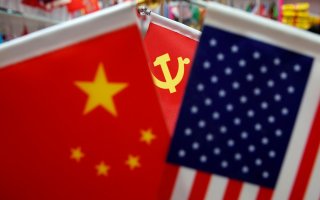 In his recent novel The Silence, Don DeLillo imagines a catastrophic moment on Superbowl Sunday in 2022. All technological devices stop working. The world he weaves is plunged into a new kind of silence. Despite no longer having access to news at their fingertips, his characters know, instinctively, that World War Three is unfolding in a place removed from, yet affecting, their lived reality.

This is a war of ‘cyberattacks, digital intrusions, biological aggressions’, bringing with it ‘anthrax, smallpox, pathogens’. Writing before the coronavirus, DeLillo has presciently captured a mood of quiet despair, a fitting publication for 2020.

Buried within the text, amid the doom of technological and biological chaos, are two sentences that jut out from the rest of the book. ‘Are the oceans rising rapidly? Is the air getting warmer, hour by hour, minute by minute?’ DeLillo never returns to these questions. Instead, they stand as a momentary reminder of a different existential threat looming in the background.

DeLillo imagines a bleak future for the next US president. But the starkness of his brief reference to climate change amid the immediacy of an unfolding nightmare reveals a bigger story of how the climate crisis and geopolitical security are often understood separately. And yet to tackle the climate crisis and overcome geopolitical tensions with China, the next administration needs to see both issues as inextricably linked.

Under the Trump administration climate science has been denied altogether. If Biden emerges president, the Democratic Party platform has placed action on the climate crisis a key part of his administration — a consequence of years of grassroots activism from groups such as the Sunrise Movement and the Green New Deal. But Biden has not repudiated Trump’s China policy framework: strategic competition. Rather than escalating the China threat, which strategic competition does, if the United States is to address the climate crisis the world faces, it needs to shift gears from a policy of strategic competition to one of engagement.

By centring strategic competition, the Trump administration has instituted a deep restructuring of the US–China relationship. In December 2017, its National Security Strategy labelled China (along with Russia) a competitor. By October 2018, Vice-President Mike Pence doubled down on this position in more detail, speaking at the conservative Hudson Institute. Since then, many Democrats and China specialists have coalesced in bipartisan support for the new approach. They see it as an answer to Chinese President Xi Jinping’s increasingly assertive actions.

The concept itself became popular in business schools during the 1980s. Analysts defined it in opposition to so-called natural competition. It was — and remains — a hyper-Darwinian strategy to increase competition in a short amount of time with the hope that, amid the upheaval, the instigator will be able to rewrite the terms of the game. As one report from Boston Consulting Group put it in 1980, ‘strategic competition is revolutionary’.

When policymakers justify strategic competition today, many do so by claiming that engagement—the bedrock of America’s China policy since 1972—has failed. ‘Diplomatic and commercial engagement have not brought political and economic openness’, two former Obama officials lamented in Foreign Affairs in 2018. Engagement, in their depiction, was really about encouraging China’s politics to become more democratic. But US engagement policies have not always or only been about changing China’s political system. Over the last 50 years, it has meant different things at different points in the bilateral relationship.

All states compete but without engagement that competition becomes zero-sum and ultimately creates a security dilemma. The next administration has a chance to abandon the framework of strategic competition and adopt a more nuanced policy of engagement. It would need to accept that Washington cannot change Beijing’s politics but also move to a more structured, open dialogue. This would allow the two nations to work towards a multilateral approach to the climate crisis. By linking geopolitics and climate, the United States and China have an opportunity to improve the prospects of both.

The United States has been here before. In the first few months of the George W Bush administration, a hardliner group pushed for strategic competition to be the guiding principle of Washington’s China policy. This changed after September 11. Bush quickly replaced strategic competition with that of China as a ‘responsible stakeholder’. He also introduced formalised high-level dialogues, beginning in 2006 with the Strategic Economic Dialogue. These were imperfect processes but they revealed the importance of diplomacy and, crucially, the expendability underpinning strategic competition.

Climate justice needs to be understood as the new imperative for abandoning strategic competition and building a new kind of engagement. Now more than ever the United States needs to increase dialogue and engagement with China, rather than lift a Darwinian tract straight out of business schools.