Strike!: Indian Farmers Shut Down Delhi in a Show of Popular Democracy 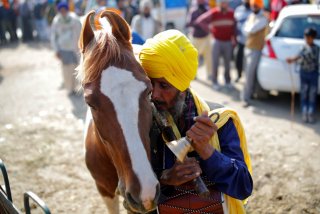 India is going through yet another restive winter. Between 200,000 and 300,000 women, men and children are camping on the highways leading to the country’s capital Delhi. They have come from neighbouring provinces, particularly Punjab, but also Haryana, Uttar Pradesh and Rajasthan. Meanwhile local agitations are being organised across the country – Punjab alone has more than 31 farmers’ unions and organisations, representing around a million farmers that have joined the movement.

The protests recall unrest across the country last year when people took to the streets in opposition to the Citizenship Amendment Act, which sought to determine certain types of citizenship on religious grounds. Ordinary Muslim women from the under-resourced neighbourhood of Shaheen Bagh in Delhi camped on the smoggy and cold streets for 101 days, attaining iconic status. It took a harsh and suddenly imposed lockdown brought on by COVID-19 to finally dislodge the women.

Like the anti-CAA demonstrators, the farmers too are fighting for their rights, as they face up to the might of the state. Once again, the government of Narendra Modi has hurriedly pushed through legislation, which farmers feel will severely affect their ability to earn a decent living.

Broadly, these laws seek to further deregulate agriculture. They allow for greater space for corporations to deal directly with farmers, without the security of state-regulated agricultural market yards, and a minimum support price for certain essential commodities.

Farmers and farmers’ unions are convinced that large agri-businesses will have disproportionate power in this arrangement, with the new laws even denying legal recourse should a deal with a corporation go bad.

The government is insistent that the farm laws are for the benefit of farmers and that protesters have been misled. This paternalistic take was also visible in last year’s anti-CAA agitation, where opponents were projected as ignorant at best, and venal and traitorous at worst.

In an attempt to firefight, the government has recently offered concessions on the minimum support price. It has also agreed to put in tax-based safeguards for private market yards. The farmers have rejected these offers. They are adamant that they will continue camping in the national capital, and blocking its roads, till the offending laws are repealed.

The deadlock continues, even as the might of farmers’ organisations and labour unions is gaining global attention. Questions have been raised in national parliaments, while international organisations including the United Nations have emphasised people’s right to peaceful protest.

Certain conclusions can be drawn from India’s successive winters of discontent. The country’s much-feted economy went into freefall in the wake of the COVID pandemic. GDP plunged to the lowest among the G20 nations, shrinking by 23.9% in the April-June quarter of 2020.

But the economy had already been slowing. On assuming power in 2014, the Modi government expedited the decline by a hurriedly imposed demonetisation of the economy, and badly implemented tax reform. Inability to build stakeholder consensus, or consult with experts across the political and ideological spectrum, is a theme that underlies many actions of the regime.

The recent “reform” to agriculture, as well as recent deregulation of labour laws, should be seen against this backdrop. The government is keen to inject vitality in markets with the expectation that this will attract national and international investment and spur growth. The barrier it faces are its own citizens.

On November 26, 250 million workers from the agrarian, transport, industrial, retail and informal sectors participated in a nationwide shutdown. On December 14, farmers, union members, opposition politicians and others are observing a day-long hunger strike, reminiscent of Gandhian satyagraha (the righteous path of truth) practised during the freedom movement.

Political authoritarians tend to cosy up to big capital. A state that operates via control rather than consensus, is being accused of prioritising the interests of industrial houses, to the detriment of the majority of its citizens. To illustrate this, opponents point to the spectacular economic success of India’s richest people, even in the face of COVID.

To quell this anger, India’s rulers have turned time and again to the classic playbook of populism and religious nationalism. Most recently, Sikh farmers were singled out for criticism. They were accused of pro-Khalistan sentiments, recalling a bloody separatist movement that peaked in Punjab in the 1980s. This accusation did not stick, as protesting farmers and workers cannot be fitted into any homogenising mould.

Perhaps for this reason the population’s attention is now being turned towards a grand building project that Modi’s government is undertaking in central Delhi. On December 10, Indians were treated to televised visuals of a Hindu ground-breaking ceremony for a new parliament complex. This is attached to a larger plan to rebuild Delhi’s central vista, which hosts grand colonial-era buildings occupied by key ministries.

Despite economic distress – and widespread protest brought on by this – people are being told this spectacular architectural marvel will increase national pride. The disjunct between the restive street and haughty state could not be more stark.

Notwithstanding this seeming moment of impasse, there is a message of hope. For many years, India’s democracy has been seen as more procedural than substantive. As far as procedures go, regular elections were held in an orderly manner and non-performing governments were thrown out in a multi-party system. But at the same time, questions have rightly been asked about the substantive reach of the democratic system – what access does it afford to the poorest?

Today, there is serious concern about democratic institutions and their resilience as authoritarianism takes over the Indian state, echoing developments across the world. Despite this shakiness of some of India’s institutions, including democratic pillars such as the courts, bureaucracy and media that appear increasingly partisan, the people have not been silenced.

Whether it is the women of Shaheen Bagh and beyond, or the farmers camping at Delhi’s border, Indians are determinedly staking a claim to public space, public resources and the very imagination of India.