The Struggle of Sharing the Painful Origin Story with Adopted Kids 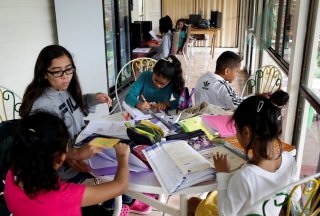 Adoption has changed dramatically in recent years. International adoptions have dropped 72% since 2005. Today, most adoptions are domestic, with the vast majority being open adoptions, meaning there is some type of contact or exchange of information between birth families and adoptive families, before and sometimes after the adoption.

Research has shown that openness benefits all parties involved. Birth parents are reassured the child they placed is alive and well, alleviating anxiety and guilt. Adoptive parents are able to answer their children’s inevitable questions, and also experience comfort and reassurance knowing they were chosen by the birth family and can be in touch with them if genetic questions arise. For children, openness eliminates the need to search for their birth parents. Access to birth parents allows children to gain insight and ask questions about their identity and roots.

I am a psychologist who studies open adoption. One topic I research is how adoptive parents grapple with the decision of whether and when to share difficult origin stories with their children.

Adoption experts advise a full, honest disclosure of a child’s origin story. This recommendation is based on years of research documenting the negative effects of secrecy on adopted individuals. Psychologists emphasize the long-term benefits trust builds between parents and their children, as well as the need adopted individuals have to know the truth about their origins in order to fully understand themselves and have healthy and meaningful relationships. This recommendation is firm, even in situations of rape or incest, birth parent substance abuse, incarceration or physical abuse.

Such discussions should be developmentally staged, meaning they should vary depending on the child’s age. For example, to a preschooler, parents might explain their birth mother was not healthy enough to care for them; to a teen, they might share their birth mother struggled with alcoholism.

All information should be shared with the child by the time they reach adolescence. Identity development begins in childhood but takes center stage in adolescence, when youth begin to ask key questions like “Who am I?” and “Who am I in relation to others?” For adopted teens, identity development can be more complete if it involves coming to terms with their conception. If adopted youth are lied to about their origins, the discovery of such lies can prompt feelings of betrayal and amplify the shame and guilt that often result from secrecy about adoption in the first place.

While the theory of how and when to tell difficult origin stories to adopted children is clear, my research has found the practice more murky.

Since 2005, I’ve been conducting a long-term study of adoptive families. I first interviewed the parents prior to adoptive placement and have interviewed them every few years since – most recently, when their children were between the ages of eight and 12. Eleven couples in my study adopted children who were reportedly conceived via rape or incest.

When I last interviewed them, none of the parents had shared explicit information about their children’s conception details. A few had tentatively raised the topic, by saying things like, “I don’t think that your birth parents were in love.” Two-thirds said they had not shared because they had incomplete or questionable information.

For example, they said they had been told by the adoption agency their child was conceived through rape, but not by the birth mother herself – so how did they know? Some wondered if the birth mother had said it was stranger rape to protect an older boyfriend from being accused of statutory rape. While parents said they wanted to believe birth mothers, the possibility of an alternative narrative gave them pause to consider the potential risks of telling a story to their children that might not be true. It’s possible, also, some were questioning birth mothers’ stories because they wish to believe a less stigmatizing version, enabling them to not have to tell it.

The desire to preserve children’s innocence, combined with uncertainty about birth mothers’ accounts, were described as key reasons for ongoing silence around their children’s origins. All study parents said they were uncertain about how they would share this information down the road. One-third had consulted or intended to consult with adoption therapists to plan the telling. Parents with ongoing birth mother contact described their intention to verify the story and plan its telling with her.

Adoptive parents in my study describe a commitment to openness, while also struggling with a lack of guidance around how and when to disclose difficult conception details. Indeed, adoptive parents generally get a lot of information and guidance before they adopt, but do not get a lot of post-adoption counseling unless they seek it out.

The parents in my study are hesitating to disclose, but are also worried about waiting too long and risking feelings of betrayal, such as, “Why did you lie to me?” Adoptive parents in this situation should consult with therapists who have training in adoption issues as they navigate these uncertain waters, with the knowledge that children deserve the truth about their own stories – even when that truth is difficult.