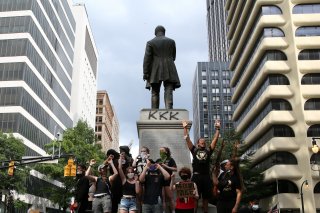 Following the lead of African American activists, a coalition of young people has taken to the streets to protest police brutality and systemic racism across the country. Protesters in the South have demanded the removal of Confederate monuments and other symbols of white supremacy. In some cases, they have taken matters into their own hands.

In Atlanta, a large crowd of demonstrators recently gathered at a statue of Henry W. Grady, the late 19th-century American journalist and orator who championed white supremacy. They chanted “We can’t breathe!” and stood on the statue’s terraced pedestal with signs reading “Black lynching must go!” and “Black lives matter.”

Some state and city leaders have responded by pledging to remove Confederate monuments in Virginia and Alabama, despite laws that forbid their removal. But the fate of the Grady statue remains unresolved.

As a journalism historian, I’ve written about Grady, the former managing editor of the Atlanta Constitution (now the Atlanta Journal-Constitution). Grady was also a celebrated spokesman of the New South, which promoted Northern investment in Southern industrialization, and leader of the white supremacist ring of Democrats who controlled Georgia after Reconstruction.

Grady is typically depicted as a brilliant editor and a “mild racist” who helped build modern Atlanta. My take is different. Grady used his newspaper as a political tool to help kill off Reconstruction’s biracial experiment in democracy. In its place, he helped create a profoundly anti-democratic, white supremacist social order that lasted in the South until the Civil Rights act of 1964 and the Voting Rights Act of 1965.

Today’s young protesters are forcing a reappraisal of Grady’s legacy.

In December, Georgia State University’s student newspaper published an open letter to Atlanta Mayor Keisha Lance Bottoms, asking her to “tear down this statue” in reference to the Grady statue in the diverse university’s neighborhood.

In February, students at Henry W. Grady High School in Atlanta petitioned the school board to give the school a name that doesn’t “honor a segregationist.”

And last week, as protests against police brutality consumed the country, the student newspaper at the University of Georgia ran an op-ed calling for the school to rename its Grady College of Journalism and Mass Communication, where the motto is “We are Grady.” A petition demands that the Board of Regents “Rename Grady” to honor Charlayne Hunter-Gault, a journalist who helped integrate the university in 1961.

These demands are important because the consequences of Grady’s beliefs are still being felt today.

To understand the roots of anti-black bias in modern policing, the history of convict labor in the South is a good place to start.

Throughout the 1880s, Grady used the pages of the Atlanta Constitution to defend Georgia’s brutal convict leasing system. Under the policy, the state arrested and convicted black men, women and children for vagrancy, minor offenses and false charges. State leaders then leased prisoners to private industrial enterprises that exploited their labor.

Why did Grady protect such a scheme? Every member of his Atlanta Ring – the cabal of Democratic Party leaders who cycled through the governor’s office and the U.S. Senate – lined their pockets with profits from the convict lease. Some built enormous fortunes.

Their camps were places of horror. Convicts were forced to work from sunup to sundown with inadequate food, clothing and shelter. Women were assaulted, and children were born and raised in captivity. Inhumane punishments included flogging, stringing up by the thumbs, the sweat box and the water torture, akin to water boarding. Death ran rampant, by torture, disease, accident and suicide.

One of Grady’s close friends, Robert Alston, attempted to expose the system and was murdered in a suspicious incident in the Georgia State House involving members of the Atlanta Ring. Grady covered the sordid affair in the Constitution, soon became managing editor and part owner, and spent the rest of his life protecting convict leasing.

As William J. White, a prominent black editor and founder of what became Morehouse College, put it: “The fortunes of many a prominent white Georgia family are red with the blood and sweat of Black men justly and unjustly held to labor in Georgia prison camps.”

In “Southern Horrors,” the first of her many lynching reports, Ida B. Wells blamed Grady and his New South doctrine for racial terror lynchings in the South. And in “Lynch Law in Georgia,” she laid bare the active role the Atlanta Constitution and other white newspapers played in inciting lynching, including the brutal lynching of Sam Hose. “The Southern press,” she wrote, “champions burning men alive.”

At the Constitution, Grady covered lynching with disturbingly lighthearted headlines. A story about a triple lynching was headlined “Triple Trapeze.” Another headline rhymed: “Two Minutes to Pray Before a Rope Dislocates Their Vertebrae.” He oversaw coverage that actively incited lynching and demonized victims as “miscreants,” “brutes” and “fiends.”

Like Wells, T. Thomas Fortune, the most influential black journalist of the period, would have none of Grady’s insistence that the South must be left alone by the North to solve the “problem” of the “Negro.”

“Grady appeals to the North to leave the race question to ‘us’ and ‘we’ will settle it,” Fortune wrote. “So ‘we’ will; but the ‘we’ Mr. Grady had ‘in his mind’s eye’ will not be permitted to settle it alone. Not by any means, Mr. Grady. Not only the White ‘we,’ but the Colored ‘we’ as well, will demand a share in that settlement.”

Fortune repeatedly confronted Grady, calling Georgia’s convict system a “cesspool of degradation and crime” that thrived “under the very nostrils of the prophet Grady.”

In the last speech of his life, Grady attacked Fortune as an “Afro-American agitator,” apparently anxious about Fortune’s creation of the Afro-American League, a national civil rights group.

In 1889 in Boston, Grady spoke against the Lodge Bill, federal legislation meant to protect the black vote in the South. Congress defeated the measure and the white South was left to disfranchise black voters by law, fraud and violence for generations.

Black Americans who lived during Grady’s day understood the man and his work for what they were. And they left a record in their journalism. White, Wells, Fortune and others created a black public sphere that has worked ever since toward building a more inclusive, egalitarian America.

Students in Georgia, having learned their history, have joined the struggle. What happens next matters if we are ever to achieve the America we all deserve.

University of Massachusetts Amherst journalism graduates Ethan Bakuli and Natalie DiDomenico conducted research for this article. Portions of this article originally appeared in a previous article published on Feb. 15, 2019.