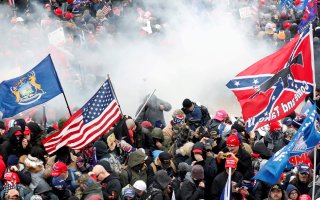 As of February 1, 2021, a total of 217 people have been arrested or charged with participating in the January 6, 2021 Capitol insurrection. Many more people will be arrested and charged in the coming months, but it’s worth looking at the demographics of this group to better understand what happened. New research by professors Robert A. Pape and Keven Ruby present the age, employment status, and other demographic characteristics of the mob that attacked the Capitol. However, Pape and Ruby left out one key demographic variable: nativity. How many of the rioters were foreign‐​born?

To fill this gap, my intern Devin Thompson and I have used Department of Justice information, District of Columbia arrest records, and numerous other sources to list the names of those arrested or charged so far and whether they are immigrants or native‐​born Americans. If those documents did not reveal the nativity, we looked at their social media accounts and news stories. Their names and the sources for each individual are available upon request.

Only 3.7 percent of the Capitol rioters were immigrants, which is lower than the nationwide foreign‐​born percentage of 13.7 percent. Indeed, 3.7 percent is below the national foreign‐​born percentage of the population at any point in American history since English settlers first landed in Virginia in 1607. The only time that comes close is the mid‐​1960s when the immigrant population fell to a low of 4.4 percent — and we all remember how politically calm the mid‐​to‐​late 1960s were.

The most interesting argument against liberalizing immigration is that the immigrants, who are mainly from countries with less productive political and economic institutions, could overwhelm and degrade American political and economic institutions. As a result, they could kill the goose that lays the golden eggs. Benjamin Powell and I wrote a book on this topic that was published at the end of 2020 called Wretched Refuse? The Political Economy of Immigration and Institutions. We found no evidence that immigrants systematically degrade economic and political institutions in their new homes along with much evidence that they frequently improve them.

The criminals who rioted in American cities in 2020 and those who perpetrated the 2021 Capitol insurrection were overwhelmingly native‐​born Americans intent on sowing chaos, fundamentally overturning our institutions, or just committing serious crimes. Regardless, the thesis that immigrants are somehow responsible for attacking American institutions has never seemed sillier. The low level of immigrant participation in the January 6, 2021 Capitol insurrection is further proof that immigrants are not the source of institutional degradation in the United States.