Study It: This Picture Can Help Diagnose Dementia 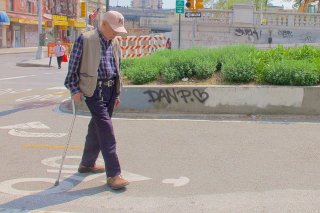 More than 50m people worldwide are living with dementia. With an ageing population, it’s likely that this number will continue to grow, as getting older is one of the biggest risk factors in developing dementia. But until researchers find a cure, having ways to diagnose this condition early and effectively is important for providing patients with the best treatment possible.

Thankfully, new research is bringing us steps closer to providing patients with better dementia diagnoses. And one study has found that the way you walk can change several years before developing dementia. This is because dementia is associated with brain cells dying, which can affect many things that we take for granted in everyday life, such as memory and thinking – and even walking.

However, dementia is an umbrella term for many different subtypes of the disease, such as Alzheimer’s disease or Creutzfeldt-Jakob disease. And because these subtypes can have different symptoms, it’s important to be able to correctly diagnose patients to provide them with the most effective form of treatment.

Alzheimer’s disease and Lewy body dementia often have similar clinical symptoms – and we might not always notice the subtle differences between the two. That means that people may not receive the right diagnosis, which could affect the care and treatment people with these conditions receive.

Alzheimer’s disease, the most common form of dementia, is characterised in the early stages by memory problems, such as consistently forgetting what happened the day before.

Lewy body dementia is instead associated with movement problems, such as slow and stiff movements or problems with balance. It’s also associated with attention problems – where someone might be very attentive one minute, then struggle to concentrate on who they are talking to or what they’re doing moments later.

Treatments for Alzheimer’s and Lewy body dementia may include being prescribed medication which may temporarily improve symptoms, cognitive stimulation therapy, or even music therapy. For Lewy body dementia, treatment strategies also include physiotherapy.

To understand if these dementia subtypes could be differentiated by their walking patterns, I looked at subtle aspects in the way a person’s walking, such as their speed and length of steps, and how much their steps change as they walk.

People were then split into three groups: the control group, who were adults over 65 with no memory or thinking problems. The other two groups consisted of people with Alzheimer’s disease and people with Lewy body dementia.

People were asked to walk across a mat with thousands of sensors inside it which created an electronic footprint. From this electronic footprint, I was able to find out more about a person’s walking patterns, such as how fast or slow they walked, how short or long their steps were, how long it took to make a step, how much their step times and step lengths changed as they walk (known as “variability”), how different their left and right steps look (described as “asymmetry”), and finally, how wide or narrow their steps are.

I found that people with both types of dementia could be distinguished from the normal ageing group based on their walking pattern. They walked slower with shorter steps, were more variable and asymmetric, and spent longer with both feet on the ground compared to control subjects. This shows that people with dementia have significant walking problems, and that we need to look at this in people at risk of developing dementia to see if it can predict the onset of the condition.

Importantly, I found that the people with Lewy body dementia had a unique walking pattern that distinguished them from those with Alzheimer’s disease. Their steps were even more variable and asymmetric when they walked.

Current methods of diagnosis rely on observation and reports of key symptoms, which indicate the need to carry out a memory assessment. Brain scans are recommended to enhance confidence in diagnosis. However, this method relies on symptoms to already be apparent, while objective methods to support early diagnosis, such as a walking test, may reveal underlying problems before such symptoms become visible.

By assessing someone’s walking, we could potentially detect and diagnose dementia earlier and more accurately. Evidence has shown that walking patterns change before memory and recognition problems become apparent.

And although Alzheimer’s disease and Lewy body dementia seem quite different, in reality it can be hard to actually recognise the symptoms of Lewy body dementia – meaning many people may receive an incorrect diagnosis of Alzheimer’s disease. And providing patients with the correct diagnosis is especially important, as certain drugs, such as anti-psychotics, can be harmful to people with dementia with Lewy bodies.

Understanding that different types of dementia have unique walking patterns could help patients receive the correct diagnosis. And this may allow researchers to better understand the effects of dementia on the brain and body in earlier stages, aiding treatment and prevention in the future.

For people with dementia themselves, earlier diagnosis can give them and their families more time to understand their diagnosis and plan for the future. As of yet, there is no cure for dementia, but an accurate diagnosis gives access to support and information, and treatments to help alleviate symptoms.