Study This Weapon: The Ancient M60 Tank Keeps on Fighting 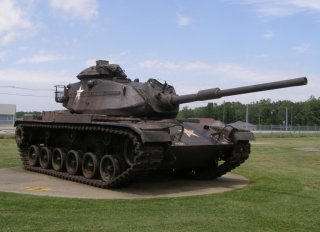 Here's What You Need to Remember: Given how many M60s are now in service, it isn't surprising that there remains a large international market for M60 upgrades. Defense industry giants Raytheon and Leonardo have begun to market M60 upgrades in recent years that could extend the useful life of the design.

In the summer of 2020, an M60 Patton tank rolled off a trailer and took its place of honor at Wayne County Veterans Memorial Park in Richmond, Indiana. The Cold War behemoth, along with a pair of naval guns, was donated to the park last year. The M60 had previously been on display for more than two decades at the recently shuttered Howe Military Academy, and it fittingly joined the park's two M3A3 Lee World War II era tanks already on display.

While that M60 won't likely see combat ever again – there are still plenty of operational M60s that have been upgraded and stand ready to head off into battle. The platform, which was originally produced in 1959 as a stopgap to address improvements in Soviet tank design, has certainly proven to be far more than a just a stopgap. As of last year the M60 is still in active service with some 17 nations around the world – a testament to the robustness of the basic design.

Even as Ankara has plans in the works to introduce its more modern, domestically-produced Altay main battle tank, the Cold War era M60 will likely remain in service for years to come. As Forbes.com had reported last year, a large portion of Turkey's tank force consists of the M60, with more than 1,000 still in service but efforts have been made to improve on the original design.

Turkey has worked with sometime regional partner Israel for assistance in upgrading the aging tanks. And while relations between the two nations isn't as good as it had previously been, Israel had offered Turkey the Sabra upgrade package – which the Israel Defense Force has used to extend the capabilities of its own M48 and M60 Patton tanks.

To date about 170 of Turkey's aging MBT's have been upgraded as the M60T in a deal that was reported to be around $687 million. The upgraded tanks feature new active and passive armor, an improved fire control system and notably a 120mm smoothbore gun and 1,000 horsepower engine.

Last summer Turkey further improved its M60Ts with the addition to the Pulat active protection system (APS) installed on six points around the hull to provide 360 degree coverage against missiles and other projectiles.

Why the M60 Won't Go Away: Upgrades

Given how many M60s are now in service, it isn't surprising that there remains a large international market for M60 upgrades. Defense industry giants Raytheon and Leonardo have begun to market M60 upgrades in recent years that could extend the useful life of the design. Among the upgrades is a 120mm smoothbore main gun, which is capable of firing NATO standard ammunition, as well as engine upgrades and other passive armor.

Italian-based Leonardo offers an armor upgrade that includes composite modules to the hull and turret, which the company claims can put the M60 on par with third-generation tanks including the M1 Abrams and German-built Leopard 2. Whether that is overly optimistic is debatable, but it certainly could provide greater capability for nations looking to maintain a large tank force.