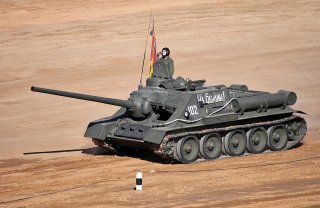 Here's What You Need to Remember: Compared to the older SU-85, the SU-100 was much more heavily protected, especially the tank destroyer’s frontal aspect.

The SU-100 was one of the Soviet Union’s most formidable tank destroyers of the Second World War. It was, in essence, a heavily modified T-34, easily one of the most iconic and well-known Soviet tanks of World War II. Both tanks shared a similar, solid chassis design. With a steeply-sloped front hull glacis, both the T-34 parent and the significantly up-gunned SU-100 offered good armor protection without a significant loss in mobility due to increased hull weight.

Outwardly, the SU-100 was rather similar to the SU-85 that proceeded it. Both shared a modified T-34 chassis, and both were specifically designed to take out German armored vehicles from a distance. Both too shared a turretless design that traded a rotating tank turret for a thick though immobile casemate. While this design choice significantly limited the main gun’s traverse, it afforded both the SU-85 and the SU-100 a lower profile. As a result, it presented German anti-tank and tank gunners an overall smaller target.

As its name suggests, the SU-100 mounted a 100mm main gun, which for the era was a very large diameter gun. In fact, the SU-100’s gun had originally been designed as a naval gun, meant to fire on ships at sea. Regardless, the 100mm gun could penetrate virtually all Nazi German armored vehicles it could have been expected to face in battle, sometimes from extreme distances.

Compared to the older SU-85, the SU-100 was much more heavily protected, especially the tank destroyer’s frontal aspect. It was also designed with better ergonomics for improved crew comfort and improved combat effectiveness. One of the key differences was the commander’s space within the SU-100. In contrast to the small, cramped SU-85 hull interior, the SU-100 was, by comparison, roomy—for the commander at least. In addition, a small sponson on the hull’s front right allowed the commander a bit more space.

The Red Army fielded the SU-100 in large numbers, though nowhere close to the number of T-34s and variants that the Soviet Union produced. Still, around 2,500 or so of the heavy tank destroyers would see combat on the Eastern Front. The SU-100 proved to be very effective against German armor, especially during Operation Spring Awakening, Germany’s last major offensive in Hungary.

The SU-100 was an effective platform; the Soviet Union would continue to produce tank destroyers until late 1947 and even later in Czechoslovakia. The mighty killer of Nazi tanks would remain in service long after the Second World War and retired from active service in the late 1960s. However, many remained in Soviet armored reserve stocks significantly later.