This Submarine Was China’s Worst Warship Ever? 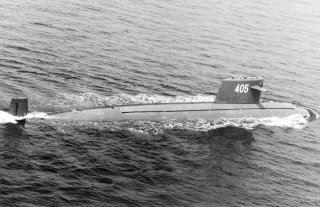 Here's What You Need to Remember: Meanwhile, the PLAN is pushing ahead with new submarines. Three Type 093B submarines were launched in 2015 alone, and a Type 095 is considered imminent. While the Type 091 may be remembered as a crude effort, it was ultimately a successful one, and an important first step in China’s self-sufficiency in nuclear submarines.

Kyle Mizokami is a defense and national-security writer based in San Francisco who has appeared in the Diplomat, Foreign Policy, War is Boring and the Daily Beast. In 2009 he cofounded the defense and security blog Japan Security Watch. You can follow him on Twitter: @KyleMizokami. (This first appeared in January 2017.)