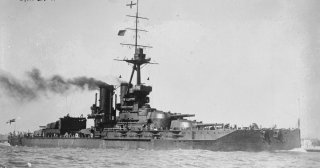 Here's What You Need To Remember: HMS Iron Duke and its sisters perfectly captured the “super dreadnought” concept; their large guns, tripod masts and balanced appearance made them look both stout and deadly. Iron Duke seemed singularly well named for its role as flagship of the Grand Fleet, although it is odd that the greatest collection of Royal Navy capital ships was led by a ship that took the name of a British Army commander.