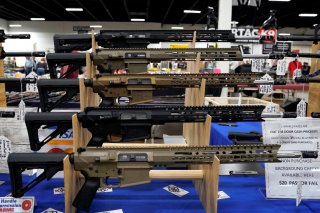 Here's What You Need to Remember: Although internally different from a typical AR-15, pistol-caliber AR is essentially identical in operation, with the same loading, manual of arms, and jam-clearing procedures. For those who don’t need the high velocity of a rifle cartridge, the pistol-caliber AR is an intriguing alternative.

The AR-15 series of rifles is one of the most versatile long gun platform ever invented.

Developed in the late 1950s, the AR-15 is available in broad array of calibers, from .50 Beowulf to .22 Long Rifle. One of the most novel adaptations of the platform is to accommodate semi-automatic handgun calibers. The result is a weapon that appears similar to the basic AR-type weapon but which has significant differences “under the hood.”

The original AR-15 weapon was adopted by the U.S. military in the mid-1960s as the M16 assault rifle. The M16 fired 5.56-millimeter ammunition and used the direct impingement gas operating system to cycle the weapon. Under the direct impingement system the M-16 siphoned off hot, high pressure gunpowder gasses from the barrel to cycle itself. The gasses drove the bolt carrier group (BCG) backward out of battery, ejecting the spent brass cartridge. As the BCG continued rearward it made contact with a spring-backed buffer tube which propelled it forward again. Moving forward, the BCG picked up a fresh round and returned to battery, ready to fire.

The direct impingement system was an integral part of the M16 rifle, and was carried over to successive versions including the M16A1, M16A2, M16A3, M16A4, and the M4 carbine. In the 1980s, Colt decided to take a different tack and develop a new version in 9-millimeter Parabellum, a popular pistol cartridge. The use of a pistol cartridge, which used significantly less gunpowder than the 5.56 cartridge and generated significantly less gunpowder gases, necessitated a reworking of the new weapon’s operating system.

Colt’s designers deleted the direct impingement operating system, which allowed them to remove the gas block and gas tube. The new gun worked on the blowback principle, a system long in use among semi-automatic pistols. Expanding gases generated from burning gunpowder drove the bolt carrier group backward, ejecting the spent cartridge. The BCG is driven back against the spring-backed buffer tube, then forward again, whereupon it picks up a fresh cartridge and goes back into battery.

Unlike the direct impingement system, which uses only a portion of the energy of the 5.56’s  propellant gases, the new blowback system used all of the energy of the 9-millimeter round. The pistol cartridge generated so much energy, in fact, that the cyclic rate of fire was a lightning-fast 1,250 rounds per minute. This also exerted great force on the new gun’s internal parts, damaging bolts and the hammer and trigger pins that held the fire control group inside the lower receiver. A hydraulic buffer slowed the rate of fire to 650 to 850 rounds per minute.

The new weapon was based on the Colt “Commando,” a short-barrel carbine developed for U.S. Special Forces during the Vietnam War. The barrel was 10.5 inches long, suitable for close quarters combat. The magazine was a straight stick-type magazine that held thirty-two rounds. The new weapon was used by the U.S. Marine Corps Fleet Anti-Terrorism Security Teams (FAST), the Drug Enforcement Administration, and the U.S. Department of Energy. These organizations favored a lower energy, lower velocity pistol round over a higher energy, higher velocity rifle round—particularly inside hijacked commercial airliners and in close proximity to nuclear weapons.

The expiration of the 1994 Federal Assault Weapons Ban saw an explosion in AR-15 innovation, and the firearms industry was quick to exploit Colt’s original 9-millimeter design. Today, AR-style weapons are available in 9-millimeter, 10-millimeter, .45 ACP, .40 Smith & Wesson, and 5.7-millimeter. Like the original Colt, these weapons use a blowback operating system, and while some use Colt-style magazines others accept magazines made for Glock handguns.

The pistol caliber AR is an interesting variant on the AR-15 platform that is gaining a wider audience. Although internally different from a typical AR-15, it is essentially identical in operation, with the same loading, manual of arms, and jam-clearing procedures. For those who don’t need the high velocity of a rifle cartridge, the pistol-caliber AR is an intriguing alternative.