Supplied by America, Turkey Has Put its M52 Armored Artillery to Good Use 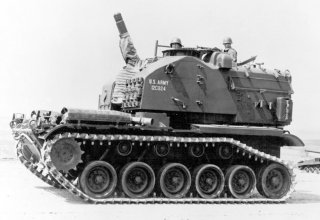 Here's What You Need To Remember: Perhaps the armored howitzer’s best feature was its commonality with the M-41 light tank and the Army’s other tracked artillery pieces. The M-42 mobile anti-aircraft gun and M-44, M-53 and M-55 self-propelled guns shared approximately 85 percent of their parts with M-52. This made it easier for units to keep spare parts in stock and for mechanics to keep the the vehicles running.

After testing various upgrades, the Turkish Army choose a German-made package. As part of the deal, Rheinmetall supplied a reworked turret with the same 155-millimeter gun found on Germany’s M-109A3G self-propelled guns.

Rheinmetall offered a similar set of improvements for Turkey’s aging M-44155-millimeter self-propelled howitzers. Between 1995 and 1998, Turkey purchased enough kits to convert its entire inventory of M-52s.

Since then, the M-52Ts have mainly made appearances during exercises. While they might to be fine for mock battles, Turkey appears to keep the vehicles in reserve. The updated M-44Ts are gone completely.