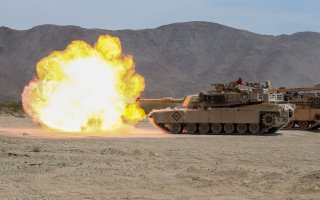 Here's What You Need to Know: Russian forces would likely conduct a well-dispersed, fast-moving advance into the Baltic States, which would mean even NATO tactical nuclear weapons wouldn’t be able to hit concentrated troop formations.

Even if NATO resorts to tactical nuclear weapons, it still can’t save the Baltic States from a Russian invasion.

One reason? The Warsaw Pact—the Eastern European satellites of the Soviet empire—can’t be held hostage anymore.

That’s the conclusion of a 2019 wargame by the RAND Corporation. In RAND’s view, NATO’s nukes are not a deterrent to Russia because Europe would have far more to lose from a tactical nuclear exchange than Russia.

“The biggest takeaway from the wargame exercise is that NATO lacks escalation dominance, and Russia has the benefit of it,” the study found. “In contemplating war in the Baltic states, once nuclear attacks commence, NATO would have much stronger military incentives to terminate nuclear operations, if not all of its operations, than Russia would.”

Indeed, the NATO players grappled with the utility of using nukes in the first place. “In our wargame exercise, NATO commanders knew that they would be rapidly overwhelmed by the Russian forces and considered early first use of NSNW [non-strategic nuclear weapons] to prevent that outcome,” noted the report. “But, the commanders wondered, what would NATO target?”

Russian forces would likely conduct a well-dispersed, fast-moving advance into the Baltic States, which would mean NATO tactical nuclear weapons wouldn’t hit concentrated troop formations, but would instead land on the civilian populations the alliance is supposed to be defending. Or, they could attack Russian units forming up in Russia, which would risk a strategic nuclear exchange. The NATO players ultimately chose to send a signal to Russia by dropping five tactical nukes on a Russian mobile air defense missile battery just inside the Latvian border.

Unfortunately, the wargame estimated that the most likely Russian response would be a tit-for-tat that dropped tactical nuclear weapons on five NATO airbases. “NATO’s infrastructure is vulnerable, and damage to it caused by even limited numbers of nuclear attacks can substantially degrade NATO’s military capabilities; meanwhile, Russia is able to withstand comparable levels of nuclear strikes against its forces.”

The study focused on whether non-strategic nuclear weapons, or NSNW, could deter a Russian attack on Estonia, Latvia and Lithuania. It also illustrated how the strategic picture has changed since the Cold War. Back then, NATO could muster fairly large conventional forces, backed by tactical nuclear weapons and ultimately American strategic nuclear forces. But times have changed. “A NATO and U.S. threat to escalate to general nuclear war over a Russian invasion of the Baltic states has doubtful credibility,” RAND notes.

Ironically, while the breakup of the Warsaw Pact was a victory for NATO, it also makes dealing with today’s Russia more complicated. During the Cold War, if NATO wanted to send a signal to Russia to back off, it could—in theory—drop a nuke on a Warsaw Pact nation without attacking Russian territory and thus triggering strategic nuclear war. That bargaining chip is gone. “Targets attacked by NATO using nonstrategic nuclear weapons would, from the outset of the war, be either in Russia proper or in NATO countries (i.e., the Baltic states),” RAND noted. “During the Cold War, NATO could (if it chose) conduct limited nuclear attacks against lucrative military targets in Warsaw Pact countries other than Russia throughout the conflict.”

Ultimately, NATO will need to muster sufficient conventional forces because tactical nuclear weapons are not a credible deterrent, RAND concluded. “Even if it chose not to escalate to general war or conduct a wider attack on targets throughout Europe, Russia could continue limited attacks on lucrative NATO military targets. The problem, then, is that NATO lacks the conventional forces required to slow or stop the rapid Russian advance. NSNW forces alone cannot substitute for NATO’s lack of those conventional forces.”