Surface Electronic Warfare is the Navy's Technology of the Future 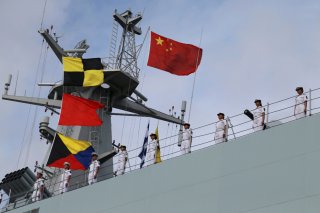 Here's What You Need to Remember:  EW can, by design, bring new, non-kinetic networked options for commanders to achieve an impactful non-explosive battlefield effect.

Such an attack scenario is increasingly realistic for U.S. Navy warfare strategists working on arming the surface fleet for massive blue-water combat. How might the Navy be equipped to respond to such a multi-pronged attack? Surely, this combination of attack strategies, designed to overwhelm and destroy ships’ defenses, could present serious problems for Navy Carrier Strike Groups.

Holistically there are a number of simple, straightforward counters—chief among them increased superiority in the electromagnetic spectrum.

“The warrior that controls the electromagnetic spectrum is likely to win the next fight,” Mike Meaney, Vice President, Land and Maritime Sensors, Northrop Grumman, told Warrior in an interview.

“We’re using the electromagnetic spectrum as a domain and as a means, and we understand and grasp it,” former Chief of Naval Operations Adm. John Greenert said in a Navy report several years ago. “We have to figure out how we can beat things electronically first. Why do we spend all this money kinetically if we can jam, spoof or do otherwise?”

How is the Navy enabling this multi-dimensional counter-attack strategy? Through an advanced EW system called the Surface Electronic Warfare Improvement Program (SEWIP) Block 3, for which Northrop Grumman is the prime contractor. The emerging Block 3 variant advances the technical features for EW by adding an advanced offensive electronic attack capability and a future capability to integrate Electronic Warfare with Information Operations (IO), among other things.

SEWIP B3 is an electronic attack weapon that is not limited to locating, jamming and disrupting inbound threats; it is also capable of conducting offensive operations against enemy communications networks, datalinks, radar systems or other electronic sources. SEWIP Block 3 is currently designed for installation on Navy DDG-51 Class Destroyers and is on track to be operational in the next few years, Northrop developers explain. Navy officials tell Warrior that the service’s new Frigate is also being engineered for configuration with advanced EW systems.

The Power of AESA

The SEWIP Block 3 EW system uses a collection of 16 Active Electronically Scanned Arrays, or AESA’s, to emit groups of targeted, individually separated “pencil” beams. “One advantage of an AESA is that it can generate pencil beams as opposed to a transmission of wide overlapping beams,” Meaney explained. “These pencil beams are narrow and specifically focused -— allowing the system to put energy only where it is needed as the track progresses quickly “A future concept is to connect crucial intelligence gathering technology with EW attack and defense systems by synthesizing IO & EW. Part of this is accomplished through consistent continuous software upgrades and threat monitoring.

“The Block 3 system operates at machine speed for rapid engagement to help drive the missile to kill itself. It is agile and fully programmable so as threats change, we can evolve,” Meaney explained. Utilizing a number of integrated individual narrowly-configured EW beams brings a number of significant tactical advantages. Not only can the system track multiple threats simultaneously, but it can also help with targeting and limit own-ship ‘signature’ emissions.

“SEWIP confuses in bound anti-ship missiles to the point where they are ineffective; EW systems are special because they have an unlimited magazine to protect warfighters against in-coming, often sophisticated, threats,” Meaney said.

By transmitting a narrower signal, an EW weapon can greatly reduce its detectability and therefore be less likely to reveal its location. Naturally, the larger and wider spanning the electronic emission, the easier it is for enemies to detect. In effect, Meaney explained that the advanced SEWIP system enables Commanders to limit the adversary to “seeing what you want them to see.”

Also, as part of this strategy, SEWIP can “turn off” emissions and enter passive and silent mode, meaning it can detect enemy signals without emitting any signature.

The Importance of EW/IO Integration

“Similarly to EW, we are manipulating operations in the information domain, revealing knowledge that enables a continuation of overall battlespace awareness and opens the aperture further to fully understand the threat environment. We can defend ships in a distributed fashion, rapidly performing multiple missions with a single system,” Kevin Hays, Director, Information (IW) Programs, Northrop Grumman, told Warrior.

It is upon this foundation that Northrop developers are expanding the EW technology by integrating it with Information Operations (IO). Part of this EW/IO integration is evolving through a Northrop Grumman-Office of Navy Research initiative to connect advanced EW with communications; this not only helps identify approaching threats with better fidelity but also works to de-conflict the EW Spectrum, which might otherwise be overloaded by multiple systems on a single ship.

This effort, engineered into the Science and Technology (S&T) predecessor to SEWIP Block 3 (known as the Integrated Topside (InTop)), is a capability that ultimately could be deployed as the U.S. Navy’s AN/SLQ-32(V)7 system, according to a Northrop Grumman White Paper called “Spectrum Superiority in the Maritime Domain.”

The essay goes on to explain that InTop development has hinged upon simulation and individual subsystem modelling related to software, electronics and system and ship structures and hardware.

“Instead of fielding EW/IO separately we are looking at how to do that simultaneously. The concept is software defined and hardware enabled,” Hays said. As Hays explained, SEWIP Block 3 is software definable, thus engineered to function for decades into the future. Northrop and the Navy are now immersed in the Low Rate Initial Production of the system.

“SEWIP is built upon advanced electronically scanned arrays, which allows you to put power where you want it, when you want it, if you need to,” Hays said. Naturally, ships are increasingly being armed with new sensors, radars, interceptors, networked aerial nodes and emerging weapons such as lasers and guided long-range attack missiles. Such systems, now engineered with added cyber resilience and advanced command and control, comprise indispensable elements of the Navy’s evolving layered ship self-defense systems.

EW can, by design, bring new, non-kinetic networked options for commanders to achieve an impactful non-explosive battlefield effect. This enables ships to track and destroy a multitude of coordinated attacks and gives commanders the option of destroying an enemy missile without creating large amounts of explosive debris - should war take place in a heavily trafficked ocean area.

“Fundamentally every ship needs a non-kinetic system to defend itself against an anti-ship missile. It is really about controlling the spectrum - if you can deny the enemy access to target you, then you can launch your own weapons with purposeful intent,” Hays said.

This article by Kris Osborn originally appeared in WarriorMaven earlier this year and is being republished due to reader interest.