Surprise! The Navy Once Sent a Message to China with Three Missile Submarines 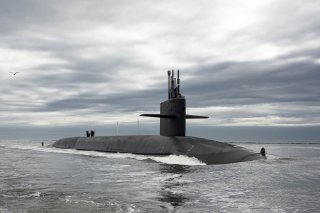 Here's What You Need to Know: The U.S. Navy simultaneously surfaced three Ohio-class SSGNs in the Western Pacific and Indian Oceans in 2010 to signal U.S. displeasure over Chinese missile tests.

Nuclear powers rarely go to war with each other, but that doesn’t mean they don’t threaten to do so. Indeed, military posturing is an integral part of what Forrest Morgan, an analyst for the RAND Corporation, called “crisis stability.” In other words, “building and posturing forces in ways that allow a state, if confronted, to avoid war without backing down.”

On the other hand, the U.S. Navy’s submarine-launched cruise missiles are less effective — even counterproductive — for crisis stability … because they’re invisible most of the time. “SLCMs could contribute to the instability,” Morgan wrote. “[T]he opponent’s anxieties might be magnified by the ability of SSGNs [cruise missile subs] to posture in stealth nearby.”

But Morgan pointed out one instance when the Navy’s Ohio-class SSGNs actually did help stabilize a crisis back in 2010 — a feat mostly lost to history. “In July 2010, three SSGNs surfaced nearly simultaneously in Western Pacific and Indian Ocean waters, allegedly to signal U.S. displeasure over Chinese missile tests in the East China Sea.”

Major missile tests are potentially provocative and destabilizing. America’s intent in the aftermath of the Chinese tests was to signal U.S. strength with just the right amount and kind of potential force. Submarines seemed to fit the bill, as if Washington were saying to Beijing, “Sure, you might surprise us with your missiles. But we remember we have plenty of missiles of our own — and they’re not far from you.”

“The appearance of the USS Michigan in Pusan, South Korea, the USS Ohio in Subic Bay, in The Philippines and the USS Florida in the strategic Indian Ocean outpost of Diego Garcia not only reflects the trend of escalating submarine activity in East Asia, but carries another threat as well. …