A Surprising Country Wants to Manufacture Their Own AR-10s 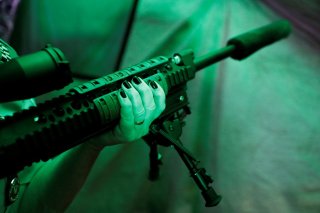 Here's What You Need to Remember: The push towards a locally-designed and -manufactured infantry rifle comes as Turkey attempts to decrease its dependence on foreign military technology.

In the early 2000s, the Turkish army began looking for a replacement rifle for its aging, locally manufactured 7.62-by-51-millimeter Heckler & Koch G3A7s.

It was a difficult process that finally resulted in the MPT-76 — an AR-10 derivative — entering service in January 2017.

This led to Heckler & Koch requesting licensing royalties. The Turkish military dropped the project in 2011.

In May 2014 MKEK developed a new prototype rifle, the MPT-76, that it co-designed with KaleKalip. MKEK delivered 200 MPT-76s for troop trials during the summer of 2014.

Rugged and reliable, these prototypes were popular with Turkish troops. MKEK reportedly described the MPT-76 as being “as effective as the G3, as reliable as the AK-47 and as practical as the M-16.”

The Turkish government has reportedly invested more than $20 million in the MPT-76 project.

The army formally adopted the new rifle in 2015 and ordered 35,014 copies for delivery in September 2015. The plan was for MKEK to manufacture the first 20,000 MPT-76s, while KaleKalip produced the balance of the initial order.

It seems there was a production delay, as the first batch of 500 MPT-76s didn’t reach troops until Jan. 11, 2017 — more than a year late. The Turkish army marked the occasion with a hand-over ceremony.

The MPT-76 is a select-fire, gas-operated AR-10 derivative with a rotating bolt. The new rifle chambers the standard 7.62-by-51-millimeter NATO round. It has an aluminum fore-end with detachable rail sections and a 12-position adjustable buttstock.

These features represent a marked improvement in modularity compared to the G3A7 and G3A7A1 rifles currently in service.

The weapon feeds from 20-round translucent, polymer magazines and has a full-length top rail to accept optics or a detachable carrying handle. The stock iron sights draw inspiration from FN’s SCAR drum sight. MKEK made significant efforts to lighten the rifle. Unloaded, it weighs just 7.05 pounds.

Ergonomically, the rifle is a major improvement over the G3. The MPT-76 has a molded polymer pistol grip, a moveable polymer angled foregrip and ambidextrous fire controls with a right-side forward assist.

There are rumors of other variants in development, including a more precise designated marksman’s rifle and a 5.56-by-45-millimeter version.

The push towards a locally-designed and -manufactured infantry rifle comes as Turkey attempts to decrease its dependence on foreign military technology.

The Turkish military possesses some 600,000 G3s, making it very likely that the government will order many, many more MPT-76s. Reports suggest that Turkey’s ally Azerbaijan is interested in adopting the rifle to replace its own aging AK-pattern weapons.

This article originally appeared on War is Boring on January 24, 2017. It is being reprinted due to reader interest.