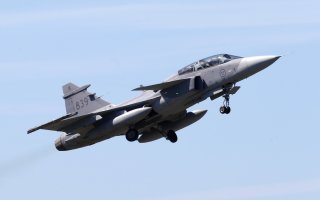 Here's What You Need to Know: The JAS-39 is an affordable workhorse that took the world air industry by storm.

(This article first appeared in February 2020.)

In late January 2020, the Saab JAS-39E Gripen arrived in Finland for its flight evaluation as part of the “HX Challenge,” Finland’s search for its next fighter aircraft to augment and slowly replace its fleet of F/A-18C/D Hornets. Saab’s offering, as some commentators have remarked, is the last “eurocanard” to be evaluated in the HX program. It also comes “bundled” with the GlobalEye Airborne Early Warning & Control (AEW&C) aircraft, which Saab markets as a force multiplier for the Gripen.