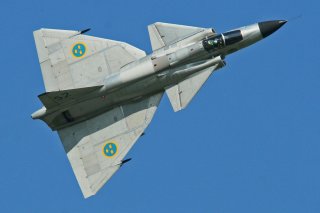 Here's What You Need To Remember: On a typical attack run, the Viggen would move to its target fast and low. The powerful engine gave it the capability to go supersonic at low levels. At a low altitude, the AJ 37 Viggen was one of the fastest aircraft in the world.

Charlie Gao studied Political and Computer Science at Grinnell College and is a frequent commentator on defense and national-security issues. This article first appeared in 2018.