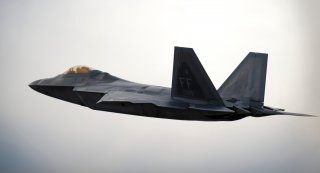 Here's What You Need To Remember: Think of the F-22 like a sniper — it can use force if needed, but its primary job in the Middle East is to provide overwatch. Case in point, in August 2016, F-22s chased after Syrian Su-24 attack jets when they approached where American commandos were operating in northeastern Syria. The F-22’s stealthiness also allows the twin-engine jet to get closer to potentially hostile aircraft or surface-to-air missile sites with less likelihood of being spotted.

Years ago, four F-22 Raptors taking part in the second-wave of the U.S.-led coalition’s opening airstrikes on Islamic State in Syria dropped their bombs. It was the first time the stealthy fifth-generation fighters had ever engaged in combat. The coalition’s war planners also used the F-22s to leverage their low-observable profiles — and far-reaching sensors — while escorting non-stealthy fighters in case Syrian fighters or air-defense systems engaged.