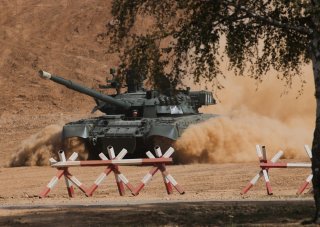 Here's What You Need to Remember: The T-80 saw its baptism by fire in the First Chechen War. The tank incurred a mixed performance record during the catastrophic siege of Grozny, with records indicating at least over a dozen confirmed losses, many to rocket-propelled grenade (RPG) fire.

The T-80 main battle tank (MBT) has its early roots in 1950s Soviet efforts to design a gas turbine engine-powered tank. It was not until the late 1960s that these efforts resulted in a viable concept demonstrator, dubbed the T-64T. Following several waves of performance, reliability, and armament upgrades, the T-64T was further developed and introduced into service as the T-80.

One of the first MBTs in the world to employ a turbine engine, the T-80’s impressive power-to-weight ratio made it faster and exponentially more agile than the T-64 tank it was slated to replace.

The T-80’s gas turbine engine offered unparalleled mobility and performed reliably in Russia’s harsh northern climates, but this technology was not without its distinct disadvantages. The T-80’s fuel consumption proved abysmal, and the tank’s roughly 300km range was well below even that of 500km of the T-64. These problems would later be solved with the Ukrainian-produced T-80UD variant, which was powered by a more conventional and much more fuel-efficient 1,000 horsepower diesel engine. Meanwhile, the tank's T-80U variant continued to be powered by a gas turbine engine and thus retained the fuel-efficiency problems of the original T-80 model.

The T-80 preserved many of the basic design principles of its T-64 and T-72 counterparts, including a version of its 2A46 125mm smoothbore gun. But this smattering of outward similarities belies more comprehensive improvements under the hood, including a sophisticated laser rangefinder and ballistic computer system in later models. The baseline T-80 received a series of major revisions shortly following its 1976 introduction. While the original model shipped without explosive reactive armor (ERA), the T-80U added support for Russia’s Kontakt-5 ERA system. The “U” revision also expanded the tank’s arsenal to support the more advanced 9K120 laser-guided anti-tank missile, while also offering thermal imaging improvements.

The T-80 saw its baptism by fire in the First Chechen War. The tank incurred a mixed performance record during the catastrophic siege of Grozny, with records indicating at least over a dozen confirmed losses, many to rocket-propelled grenade (RPG) fire. Russian officers at the time were particularly keen to blame the tank’s gas turbine engines, but military experts and historians have disputed the extent to which the T-80’s poor performance can be ascribed to technical malfunction. In point of fact, these tanks were not well suited for anti-infantry combat missions in tight urban spaces. It likewise didn’t help that they were manned by inexperienced and undertrained Russian crews that were pit against grizzled, highly motivated defenders with intimate knowledge of the terrain.

Over 5,000 T-80 tanks were produced, with 400-500 T-80U, T-80BV, and recently modernized T-80BVM models in service today. All Russian T-80’s are slated to eventually be replaced by the new T-14 Armata MBT, though it remains to be seen how quickly the T-14 can be mass-produced in militarily sufficient quantities.