Is the T-90M Russia's Deadliest Tank? 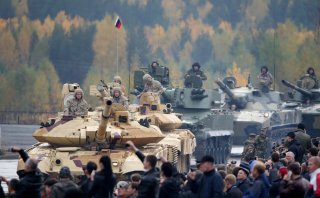 Here's What You Need to Remember: In a fight, the M1A2 SEP v3’s Trophy system would probably neutralize any advantage the T-90M’s Invar-M ATGM gives.

Comparing the two, the armaments are practically the same. While the ammunition datalink being part of the SEP v3 is reported as an innovation, the Russians have fielded similar capability with the Ainet ammunition datalink since the T-90K in the early 1990s. Ammunition quality is probably relatively similar, although the new M829A4 is said to be able to defeat third-generation ERA packages, which would include the T-90M’s Relikt. The T-90M’s slat and net armor packages would have no effect on an APFSDS round, as they are geared towards HEAT-type projectiles. The T-90M likely uses the same “Svinets” rounds that have been in service since the 2000s, which are considered to be fairly lethal. The T-90M also retains the ability to shoot the Invar gun-launched ATGMs, a capability the M1A2 never really possessed despite the theoretical ability to do so with Israeli LAHAT missiles. In terms of detection, the M1A2 is probably superior because of the third-generation domestic thermal imagers, compared to the T-90M’s foreign export imagers. Mobility-wise, the T-90M’s lighter weight gives it increased operational mobility.

This article was first published in 2018 and is being reposted due to reader interest.