Taistelukenttä: This Must-See Film is Required Viewing for Finnish Troops 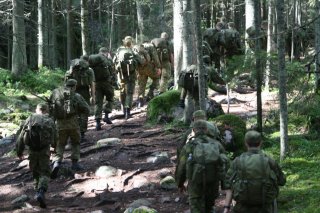 Here's What You Need to Remember: The trailer shows that the film is updated stylistically and thematically in how it presents the outbreak of war for Finland. In looking at the differences between the trailer and the original film, it may provide an interesting perspective into how warfare has changed in the last 30 years.

The pedagogical value of short films for military recruits is well known to the Finnish Defence Forces (FDF). In some units, every class sees some short films that are meant to prepare them in some way for their jobs as soldiers. One of the most prolific of these films is Taistelukenttä, or Battlefield, which has achieved near-legendary status among those who served. But the original version of the film was produced in the 1990s, with the backdrop of the Yugoslav and Gulf wars. In order to prepare conscripts for potential conflicts in 2020 or further into the future, the FDF is commissioning an updated version of the film, the trailer for which dropped on January 13, 2020.

Attacks happen rapidly after that. Missile attacks are prosecuted against FDF ships, and a civilian airliner is said to have an emergency that causes it to land at Kajaani airport. The trailer then shows a camera shot, presumably from the perspective of an airport fire truck, of armed men on the tarmac of the airport, advancing, accompanied by descriptions of military men. A news anchor then announces that a military operation is taking place at Kajaani airport, followed by shots of FDF Special Forces snipers and assaulters conducting operations there. This is probably indicative that Finland fears a “little green men” scenario, where unmarked or civilian marked vehicles and unmarked troops may be used to stage an attack on Finnish soil, and the film aims to show a resolute, decisive response. Only after the initial attacks does the Finnish parliament and president declare martial law and move Finland into an official state of war, as opposed to in the 1990s film where that occurred before the breakout of major hostilities.

In the trailer things only escalate from there, we see further shots of combat involving regulars and the Air Force and Navy. It’s important to note that the 1990s Taistelukenttä was not an optimistic propaganda film. Finnish troops are shown getting plastered at every turn, with enemy artillery pummeling an unprepared forward base, and mechanized troops going to the front dismounting in an enemy minefield of air or artillery scattered mines.

Charlie Gao studied political and computer science at Grinnell College and is a frequent commentator on defense and national security issues. This first appeared earlier in 2020 and is being reposted due to reader interest.