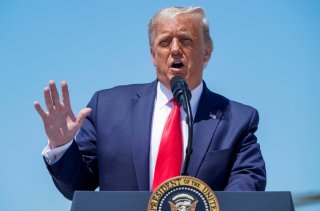 Since April, the administration of US President Donald Trump has been ratcheting up its rhetoric and actions regarding China. This strategy is intended to deflect blame for its mismanagement of the COVID-19 pandemic at home. It is having the side effect of appearing to dismantle the policy of ‘engagement’ with China of the previous seven US administrations and the way they treated Taiwan.

Trump sent Alex Azar, his Secretary of Health and Human Services, to visit Taiwan earlier this August. Azar is the first senior-level official of the Trump administration to do so, and the first since 2014 when the then head of the Environmental Protection Agency visited the island on behalf of then president Barack Obama.

Given the context of deteriorating US ties with China, rising anti-Chinese rhetoric and the sensitivity of the Taiwan issue to Beijing, which regards Taiwan as a ‘core interest’, the visit seems to come as close to crossing one of China’s ‘red lines’ as possible.

Attention to Taiwan at this level is not a hallmark of the Trump administration. Trump first alarmed China when, as president-elect in November 2016, he accepted a congratulatory phone call from Taiwanese President Tsai Ing-wen. But buyer’s remorse set in on both the Trump and Tsai camps shortly after. The Trump administration quickly retreated to the behaviour and formulas of previous US governments on dealing with Taiwan.

As former national security advisor John Bolton revealed in his new memoir, Trump regards Taiwan as relatively insignificant, comparing it to the nib of his felt-tip pen. Trump’s inattention to Taiwan during his time in office until now evidences this.

By sending Azar to Taiwan, the Trump administration called attention to Taiwan’s astute and effective response to the COVID-19 pandemic.

The Taiwanese authorities responded to the previous SARS epidemic by building on the island’s highly developed medical and insurance institutions to upgrade its capacity to manage epidemic outbreaks. This upgrade allowed Taiwan to respond swiftly and comprehensively to the COVID-19 threat from the very beginning. The United States would do well to hope Azar has learned from Taiwan’s example and returns home with lessons for its own pandemic response.

Much of the media coverage of Azar’s visit incorrectly pointed out that he was the highest-level official to visit Taiwan since the United States severed relations in favour of Beijing in 1979. The reports also anticipated and reflected strong reactions from the mainland.

The Chinese idiom ‘much thunder, little rain’ (leishengda, yudianxiao), which might be loosely rendered in English as ‘much ado about nothing’, neatly captures what transpired with the dispatch of the Secretary to Taiwan.

China’s official spokespeople denounced the visit and said it was inconsistent with previous US promises to conduct only ‘unofficial’ relations with the island and its people. China’s official media simultaneously announced military exercises in the Taiwan Strait area and north and south of Taiwan.

US Secretary of State Mike Pompeo made public remarks highlighting Azar’s visit and, surprisingly, reassuring Beijing. Pompeo told his interviewer, former White House press secretary Sean Spicer, that the United States intends to uphold its ‘obligations and commitments with respect to the historical understandings between the United States and China on Taiwan’. He proceeded to say that Secretary Azar’s visit is ‘wholly consistent with those commitments’.

What Pompeo was doing was camouflaging his message that, despite the Trump administration’s statements and actions since April that appear to be dismantling aspects of the US–China relationship, Washington is not really crossing China’s red lines in this sensitive area.

Visits such as Azar’s were regular features of US–Taiwan relations in the 1990s, when cabinet-level officers from departments and agencies not responsible for national security, like Azar, biennially attended ROC–USA Business Council meetings. China had also ritually denounced those visits as inconsistent with US official undertakings. It was the Taiwanese administration of former president Chen Shui-bian that played down the Council which led to the loss of venues for routine visits during his tumultuous years in office (2000–08).

Even China’s recently announced military exercises appear to be part of an annual routine, but they were highlighted in China’s media as part of Beijing’s denunciation of Secretary Azar’s official visit to Taiwan, although not as an indication of intent to use force in some fashion against Taiwan or the United States. The exercises were in fact over 400 and 550km from Taiwan, not just offshore. China’s behaviour resembles that of the Trump administration, which now routinely publicises events like US Navy transits of the Taiwan Strait that have been going unreported but not unknown to Beijing for years.

As with many of the threats, sanctions, trade tensions and tariffs between the United States and China so far, the Taiwan visit of Secretary Azar is more thunder than rain. But that could change dramatically and may well if the Trump team wants desperately enough to stir a strong Chinese reaction for domestic or other purposes.

Douglas H Paal is a distinguished fellow of the Asia Program at the Carnegie Endowment for International Peace. He has served as the de facto US representative to Taiwan as director of the US government’s American Institute in Taiwan.