Taiwan Has Its Own Spin on America’s Favorite Weapon: The M-16 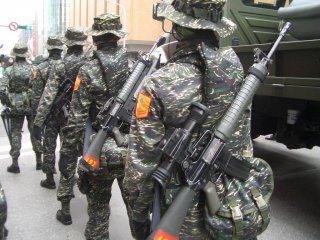 Here’s What You Need to Remember: The T91 will remain an interesting footnote in the history of the M16 platform as one of the first truly viable external short-stroke piston ARs to reach widespread production.

Despite early problems in Vietnam, the American M16 made a major impression on many Western-aligned nations in Asia. The Republic of Korea, the Philippines, and Singapore began license producing the M16A1, and many other nations bought M16s straight from the United States. However, Taiwan bucked this trend, developing the T65 rifle in the 1960s. However, the T65 is hardly a clean-slate design, practically copying the M16 design in the lower receiver and heavily emulating other elements in the upper receiver.

The primary difference between the T65 and the M16 is the incorporation of a short-stroke external piston gas system instead of the internal piston gas system used in the M16.  But unlike Armalite’s AR-18 the rest of the design is practically unchanged from the M16, retaining the recoil spring in the buffer tube and the cylindrical bolt carrier group of the M16, as opposed to the dual recoil springs in the receiver and “boxy” bolt carrier group of the AR-18.

There are also differences in the sighting and handguard setup of the T65, with a different triangular handguard being used on the T65 and a simple non-carryhandle rear sight used instead of the M16’s carry handle rear sight on the original T65. In theory, this could make integration of optics easier, but the receiver was not tapped for the addition of an optic and a M16 carry-handle style rear sight was added on the T65K2 variant.

But with the later T91 variant, the Taiwanese developers swapped the carry handle and fixed sights for a Picatinny rail, following the trend set by the Canadian C7A1 rifle, the first service rifle to feature a “flat top” railed upper receiver.

But around the time that the T91 was created, the concept of an external short-stroke piston-driven AR started to become more and more popular. Interest in these guns was driven by the HK416 despite the existence of the T91 and T65 due to smart marketing by HK and the additional capabilities such as an “over the beach” ready variant of the HK416 existing. Other manufacturers proceeded to build their own take on the external short-stroke AR, including Sig Sauer with the Sig 516 and LWRC with their M6 series.

But the T91 has many more years of development being it, being created nearly forty years prior. Why didn’t it see more interest? One reason is probably because both the T65 and T91 were primarily developed for internal use and military export, without much attention paid to the civilian market. There were also many similar Asian designs competing against it in the 1980s, such as the long-stroke piston Korean K2, and the Singaporean SAR-80. While the K2 saw some success on the US civilian market, it lacked the feature set to truly compete with the AR-15 and its derivatives.

It took a partnership with Wolf Ammunition that imported T91 upper receivers into the United States, under name “Wolf A1” for interest to be truly revived in the T91 piston system. The true legacy of the T65 design shows, as these can be placed directly on most civilian AR-15 lowers that are built to military specifications. By most accounts, the uppers are reliable, accurate guns. But they are coming in at a time where interest in piston systems is fading on the civilian market.

The T91 could be replaced in the near future as its makers, the 205th Armory, unveiled the XT-107 rifle in 2017. The XT-107 resembles the FN SCAR, which seems to be the latest ergonomic trend in Asia as Japan’s Type 89 replacement resembles it too. But it will remain an interesting footnote in the history of the M16 platform as one of the first truly viable external short-stroke piston ARs to reach widespread production.