Taiwan Might Experience Buyers Remorse Over the F-16 Fighter 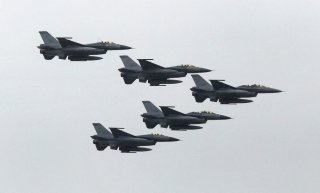 Here's What You Need to Remember: Fighters arguably are the least important system for this new strategy, although they could play an important role firing anti-ship missiles at Chinese invasion ships, according to Thompson. It’s likely, however, that few planes will survive China’s initial bombardment of Taiwanese airfield. “PLA strikes … will devastate Taiwan’s airbases.”

Nearly a decade after first requesting them, the Taiwanese air force finally could get 66 new F-16 fighters to begin replacing some of its older fighter aircraft.

But the $8-billion fighter-acquisition, which the administration of U.S. President Donald Trump approved over strong objections from China, likely will do little to alter the overall balance of power across the Taiwan Strait.

China possesses hundreds of more modern fighters than Taiwan does. Sixty-six F-16s won’t change that. And Taipei already has begun to revamp its defensive strategy to de-emphasize the importance of conventional major weapons systems such as F-16s.

To counter China’s roughly 1,500 fighters, Taipei possesses around 400 fighters of its own including aging F-5s and Mirage 2000s, locally-made F-CK-1s and the survivors of 150 F-16As and Bs that the island country bought from the United States in 1992. In 2001 the Taiwanese government asked for 66 F-16Cs and Ds.

But the modernization occurs just as fighters are beginning to matter less to Taiwan’s defense strategy. Drew Thompson explained the strategy in a 2018 article for War on the Rocks.

“Last year, Taiwan’s chief of the general staff Adm. Lee Hsi-ming quietly proposed a revolutionary new approach to Taiwan’s defense, called the Overall Defense Concept,” Thompson wrote. “This new concept, if effectively implemented, could turn the tables and give Taiwan a fighting chance of preventing China from being able to take it by force.”

Taiwan’s new defense concept employs an asymmetric defense strategy, where Taiwan maximizes its defense advantages, and targets an invading force when it is at its weakest.

Whereas Taiwan’s previous strategy focused on fighting across the entire Taiwan Strait and defeating the enemy through attrition, the new concept divides Taiwan’s defense operations into two phases, both closer to Taiwan’s shores where the lines of communication are short and Taiwan’s forces can benefit from land-based air denial and more effective surveillance and reconnaissance.

The first phase is the decisive battle in the littoral, extending up to 100 kilometers from the island. Key capabilities at this phase will include sea mines, and large surface vessels equipped with Taiwan’s capable, domestically manufactured anti-ship cruise missiles, the Hsiung Feng 2 and 3.

aiwan also fields anti-ship Hsiung Feng missiles mounted on trucks that will disperse in order to survive initial strikes. While evading detection in Taiwan’s urban and mountainous terrain, they will launch strikes at surface ships throughout an invasion.

The second phase seeks to annihilate the enemy at the beach area, which extends approximately 40 kilometers outwards from anticipated invasion beaches. This phase calls for Taiwan’s navy to lay mines in deep and shallow waters off suspected landing beaches. A new fleet of automated, fast minelaying ships are being built for that mission. In the interim, mine-launching rails can be installed on several classes of surface vessels.

The Taiwan army comes into play at this phase, laying beach mines, and targeting enemy ships with precision fires, including minesweepers. Precision artillery will target any vessels and troops reaching shore, using area-effects weapons such as indigenously built multiple-launch rocket systems with cluster munitions and attack helicopters including AH-64E Apaches.

The Taiwan air force will seek to deny Chinese fighters, bombers and drones from Taiwan’s battlespace by deploying integrated air defenses, including Patriot PAC-3 batteries and domestically manufactured Tian Kung-2 surface to air missiles that are assigned to defend air bases and critical infrastructure, and smaller mobile air defense systems, such as U.S.-provided Avenger systems to prevent the PLA Air Force from providing close-in air support to their invading forces.

Fighters arguably are the least important system for this new strategy, although they could play an important role firing anti-ship missiles at Chinese invasion ships, according to Thompson. It’s likely, however, that few planes will survive China’s initial bombardment of Taiwanese airfield. “PLA strikes … will devastate Taiwan’s airbases.”

Taiwan is finally getting its new F-16s. Right at the moment they’re ceasing to matter.

This first appeared in August 2019, and is being republished due to