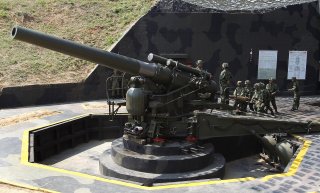 Here's What You Need to Remember: The range of the M1 howitzers on Kinmen and Matsu islands can threaten Xiamen, a city of five million on China's southeast coast.

The 240-millimeter M1 howitzer, or “Black Dragon,” was the heaviest piece of field artillery the U.S. Army deployed in World War II. The huge guns smashed the Axis Powers’ concrete fortifications in Europe to rubble, and blasted Chinese mountain bunkers during the Korean War.

“There was little call for the type to be employed whenever the fighting was fluid as it took too long to emplace the weapons or get them out of action, but when they were used the heavy 163.3 kg (360-lb) high explosive shells were devastating weapons,” Chris Bishop wrote in the exhaustive Complete Encyclopedia of Weapons of World War II.

The Army retired them in the 1950s. And that would have been the end of the story, were it not for Taiwan burying them deep inside forts on the Kinmen and Matsu islands a short hop from the Chinese mainland. From Kinmen, the Black Dragon’s 14-mile range can reach Xiamen, a city of five million people along China’s southeast coast.

I had no idea these weapons still existed, and was frankly amazed they’re still in service. It’s worth remembering there was a time when the islands were at the front line of a long and violent conflict, one characterized by frequent artillery duels and commando raids. Now the islands are tourist attractions and Taiwan’s military presence fell sharply … decades ago.

Beijing’s military is also now considerably stronger and can fight from even longer distances than conventional artillery, rendering a 1940s-era super howitzer more or less pointless. But still, it’s impressive.