The Tank Battles of World War I Changed Warfare Forever 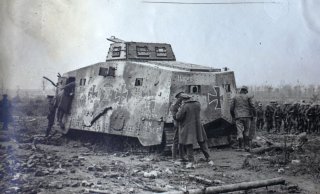 Key point: Tank usage in WWI outlined simple but useful lessons to military observers wise enough to pay attention, such as the impotence of machine-gun armed tanks versus cannon-armed vehicles and the importance of coming to halt to deliver accurate cannon fire.

One hundred years ago, on the evening of April 23, 1918, a thousand German artillery pieces unleashed a holocaust of high explosive shells and mustard gas around the French town of Villers-Bretonneux. Imperial Germany had to launch a last-ditch Spring Offensive in the sector around Amiens in an attempt to defeat French and British forces before U.S. reinforcements could tilt the balance of power against them.

The French village had the misfortune of being situated on a high plateau which offered a good observation point for the bombardment of Amiens. British and Australian troops had repelled an initial German attack in the first week of April after a six-day battle.

This was an A7V, Germany’s first home-built tank. The keels of the thirty-six-ton vehicles were armored in thirty millimeters of steel and resembled the ironclad warships of the U.S. Civil War. A stubby fifty-seven-millimeter cannon protruded from the monster’s prow, while three MG08 Maxim machine guns poked from each side of its seven-meter long hull. The top-heavy vehicles were prone to tipping over and could manage nine miles per hour on roads, or half that cross-country.

The lead A7V was named Nixe (“Mermaid”) and she was commanded by forty-one-year-old Second Lt. Wilhelm Biltz, an accomplished chemistry professor in civilian life. Biltz had to manage a standard crew of eighteen inside the cramped vehicle. Rolling ahead alongside attacking infantry, Biltz’s vehicle destroyed several Australian machine gun nests and overran infantry entrenchments.

The Australian troops were not used to being attacked by tanks—usually, it was the Germans who were on the receiving ends of armored assaults during World War I. The British Army deployed its first tank, the Mark I to mixed effect in the Battle of Somme in 1916. Though initially terrifying to German infantry, the Mark I proved vulnerable to artillery. However, most of the cumbersome vehicles were lost when they broke down or become immobilized on difficult terrain and were abandoned by their crews.

However, a year later the British concentrated over four hundred improved Mark IV tanks to rupture German defensive lines in the Battle of Cambrai. Although the British inability to rapidly exploit that breakthrough gave the Germans time to retake Cambrai using newly developed “stormtrooper” infiltration tactics, the tank had finally proven its potential to be a decisive weapon.

The British tankers of the A Company of the Tank Corps were having an awful morning. They had been assigned to guard the railway switchline at the hamlet of Cachy, southwest of Villers-Bretonneux. Caught outside their vehicles during the German bombardment, the crew of Lt. Frank Mitchell’s Mark IV tanks were badly exposed. Mustard gas painfully blisters and scars the skin on contact—and the inside of the lungs if inhaled. Out of Mitchell’s crew of seven, only three were left in any condition to operate their vehicle.

Mitchell’s tank was a Mark IV “male” tank, a phallic reference to the fact it was armed with two side-mounted six-pounder Ordnance Quick Fire cannons on swiveling sponsons with 100-degree arcs of fire. Like the German tank guns, these also fired fifty-seven-millimeter shells. Additionally, there was a front-mounted Hotchkiss .303 machine guns, as well as one in each side sponson.

These early tanks were claustrophobic nightmares for their crews. Poorly ventilated, choking gunpowder fumes rapidly accumulated in the crew compartment, which were unbearably hot. Worse, the crew had to breathe through suffocating gas masks in case of chemical weapons attacks. The noise produced by the six-cylinder inline petrol engine was deafening, so a system of colored lights had to be employed to transmit simple commands driving and targeting commands to the crew of seven.

The Mark IV females raked Nixe with their machine guns—but even primitive tanks could not be penetrated by rifle-caliber machine-gun fire. The Nixe’s cannon, in turn, blasted holes in the females, crippling one and exposing them to small arms fire, forcing both to withdraw.

The armored action was not yet finished. Mitchell’s lone tank began blasting canister shells (shotgun shell-like munitions packed full of steel balls) at attacking German infantry. Soon he was joined by a squadron of seven fourteen-ton Mark A “Whippet” medium tanks. These three-man tanks were twice as fast as a Mark IV at eight miles per hour and were armed with four Hotchkiss machine guns, one for each facing of the vehicle.

Mitchell’s tank, meanwhile, became a target first for a strafing German fighter plane, and then from an indirect fire from a field gun. Mitchell unsuccessfully tried evading the shellfire, but eventually, shrapnel from a round jammed its tracks. Mitchell and his crew escaped to a nearby trench.

Meanwhile, Lieutenant Biltz, seeing that the coast was clear, crept back up to the abandoned Nixe with the survivors of his crew. They somehow managed to restore the thirty-two-ton vehicle to running order and crawled it back to friendly lines. Another A7V, Mephisto, was abandoned on the battlefield and captured by Australian troops while still in combat. Today it can be seen at the Queensland Museum in Brisbane, Australia, decorated with a red devil carrying what appears to be a surfboard under one arm (but is in fact meant to represent a tank.)

Starting around noon, a series of rapid counterattacks by British, Australian, French, and Moroccan troops rolled German forces back out, culminating in a night assault that surrounded and eventually recaptured Villers-Brettoneux.

Those lessons might seem obvious in hindsight, but England, Germany, and Poland all continued deploying numerous machinegun-only tanks at the beginning of World War II before their tactical inadequacy finally sank in. For the British and German crew and junior officers on the morning of April 24, they had to improvise every step of how they engaged in their first battle between lumbering armored behemoths.