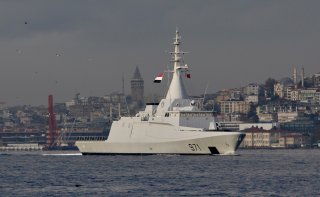 Here's What You Need to Remember: Rosoboronexport’s success is part of Moscow’s larger strategy of establishing political, economic, and military inroads with a slew of African partners. Africa’s chronic political volatility guarantees a constant demand for military hardware of all kinds—a demand that Russia’s defense sector continues to meet with a supply of cost-effective and reliable weapons.

Russia’s state arms export agency, Rosoboronexport, announced earlier this week that it signed export contracts with African states worth as much as $1.5 billion in 2020.

“The price tag is more than $1.5 billion,” Rosoboronexport Director General Alexander Mikheyev told reporters at the International Defense Exhibition (IDEX) 2021 on Sunday. “We signed contracts with more than ten African countries in 2020. We have received an advance payment and have started fulfilling it,” he added.

Mikheyev’s comments shine a light on what has been a burgeoning Russian presence in African arms markets. The Soviet Union was not only a major arms supplier too, but maintained an active military presence in Africa throughout the latter years of the Cold War. This influence receded in the years following the Soviet collapse, with Russia’s military in stagnation and technical disrepair throughout much of the 1990s. But the Kremlin has since picked up where its Soviet predecessor left off, not only rebuilding neglected relationships but making unexpected new inroads.

As of 2020, Rosoboronexport accounts for a staggering 49% of arms imports to Africa. Russia seized and considerably widened its export lead over its two biggest competitors, France and the United States, over the past two decades. Russia has sold arms to at least twenty-one African states; of these, Algeria and Egypt are by far the biggest clients. Algeria has purchased a wide swathe of Russian heavy military hardware, including over 500 T-90SA main battle tanks (MBT’s) and 300 modernized BMPT-72 Terminator 2 infantry fighting vehicles. Meanwhile, Algeria’s considerable stock of combat aircraft and military helicopters is almost entirely of Soviet and Russian origin; Algiers has reportedly signed contracts for the delivery of Su-34 strike fighters and Su-35 air superiority jets in the past few years, though there is yet to be formal confirmation of these purported deals.

The case of Egypt aptly illustrates Russia’s meteoric rise to dominance in African markets. Egypt’s tank force was in previous decades by over 1,000 locally produced models of the American M1A1 MBT, but now Cairo is shifting a large chunk of its MBT needs to Rosoboronexport as part of an ambitious deal that would see up to 500 Russian T-90MS MBT’s produced by Egypt’s domestic defense industry. Similar trends can be observed in Egypt’s Air Force, which has recently signed a deal with Russia for the Su-35 fighter. Angola is a newer, up-and-coming client of Russia, seeking to refresh its aging stock of Soviet military hardware with a mix of direct import and expensive licensed production deals. Tor and Pantsir-series Russian missile defense systems, as well as attack helicopters and assault rifles from Kalashnikov’s AK-200 family, have proven consistently popular across a wide gamut of African states. More recently, Rosoboronexport has inked a deal to sell BK-10 assault boats to an unspecified Sub-Saharan client; the move highlights the further expansion of Russian arms sales to Africa beyond well-trodden categories like small arms and tanks.

Rosoboronexport’s success is part of Moscow’s larger strategy of establishing political, economic, and military inroads with a slew of African partners. Africa’s chronic political volatility guarantees a constant demand for military hardware of all kinds—a demand that Russia’s defense sector continues to meet with a supply of cost-effective and reliable weapons. Moscow has broken into the African arms trade in a big way, and there is no indication that it will relinquish its dominant market position any time soon.