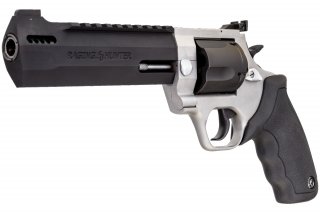 Key Point: With the Raging Hunter’s innovative design and respectable attempt at curbing excess recoil, the barrier of entry for revolver hunting is now lower than ever.

Gun manufacturer Taurus is best known for its diverse and affordable lineup of self-defense and every day carry (EDC) pistols, but the Brazilian company has made several forays into the hunting revolver space over the past several decades. The new Raging Hunter has not only earned the NRA American Hunter’s 2019 Hunting Handgun of the Year Award, but is arguably one of the most balanced .44 Magnum handguns on the market.

Taurus’ first attempt at a hunting revolver was the 1997 Raging Bull, advertised as a .44 Magnum alternative for hunters looking to try something different from the typical hunting rifle or shotgun. The company also released the Taurus Tracker, a .357 Magnum for hunters looking to adopt a revolver as a sidearm. The Raging Hunter seeks to perfect the Raging Bull formula, borrowing the aesthetics of the latter while introducing a host of practical performance improvements to make it a best-in-class hunting revolver.

Whereas hunting handguns typically feature a steel frame and barrel, the Raging Hunter is immediately distinguished by a full-barrel aluminum shroud. The shroud boasts an integrated picatinny rail that can accommodate a wide range of red-dot and reflex sights, as well as certain scopes with the appropriate ring. But there is an even greater benefit to this peculiar design: the Raging Hunter is remarkably light for a hunting revolver, coming in at 55 ounces, or around 8 ounces less than the baseline Raging Bull version. The Raging Hunter features the signature red, cushioned back grip insert that can be found on almost all of Taurus’ flagship guns, as well as an adjustable rear sight and transfer-bar safety mechanism to prevent accidental discharge. The revolver is currently available in two finishes, an anodized matte black and two-color stainless scheme, as well as several different barrel lengths ranging from 8.37 to 5.12 inches. While these small design features can easily be overlooked in isolation, they combine into an attractive, ergonomically-pleasing package.

As with the Raging Bull, the Raging Hunter comes in several variants that are chambered in different calibers: namely, .357 Magnum, .44 Magnum, and .454 Casull. The .454 Casull is one of the most powerful consumer handgun calibers in production, capable of firing bigger bullets at significantly higher velocities than the .44; this makes the .454 the most effective choice for hunting game larger than deer, such as Bears and Elk. But all that power comes at great cost to handling, registering up to twice the recoil of its .44 counterpart. 357 revolvers offer by far the least recoil of the three, but may struggle against large game under some circumstances. There is enough performance overlap between the .44 and .454 calibers that the former is arguably a more balanced choice in most hunting contexts.

Recoil has always been the Achilles heel of large-caliber hunting revolvers, but the good news--especially for those considering the .44 or .454 versions--is that the Raging Hunter is aggressively ported to minimize muzzle jump in comparison with others in its class.

Hunting handguns, though admittedly an acquired taste, have secured a steadily-growing following over the last several decades. With the Raging Hunter’s innovative design and respectable attempt at curbing excess recoil, the barrier of entry for revolver hunting is now lower than ever.