This Technology Can Make Any Ship Capable of Missile-Launching Madness 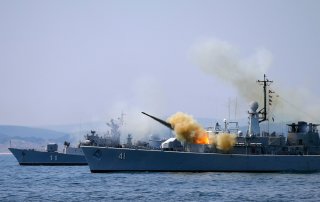 Here's What You Need to Remember: Assuming it fulfills its hype, then, the ADL will empower naval commanders to proliferate anti-air, anti-ship, anti-submarine, and land-attack weaponry throughout the fleet at minimal cost.

Over at The Drive, the redoubtable Tyler Rogoway relates the feel-good story of the summer, an instant classic: the defense firm BAE Systems says it has developed an “adaptable deck launcher” (ADL) that can be bolted onto any ship of war with deck space to spare. Weaponeers can load up the four-cell launcher with the same missile canisters used in the Mk 41 vertical launch system (VLS), the standard launcher installed aboard U.S. Navy cruisers and destroyers and ships from a handful of allied navies.

BAE’s add-on deck launcher is a mundane piece of kit with strategic promise. Whereas the Mk 41 VLS is basically a block of silos embedded in a ship’s structure, the ADL sits on the deck and disgorges missiles at an angle. The philosophy is the same one that drove the armored box launchers used to transform World War II-vintage Iowa-class battleships into Tomahawk missile shooters when the battlewagons underwent refits during the 1980s. Big ship, abundant open space on deck, instant missile carrier.

Standardized canisters lend themselves to a mix-and-match approach to armaments. The ADL can accommodate four to sixteen missiles depending on the types—and, most critically, sizes—of munitions commanders want in the panoply for a particular ship. For comparison’s sake, a Ticonderoga-class cruiser is fitted with 127 vertical launch cells and an Arleigh Burke-class destroyer with 96. In other words, the ADL furnishes modest bolt-on launch capacity compatible with armaments the navy already uses. And it can be mounted on most any hull of sufficient scale.

Teeth are gnashing in Beijing, Moscow, and Tehran. What’s not to like?

Assuming it fulfills its hype, then, the ADL will empower naval commanders to proliferate anti-air, anti-ship, anti-submarine, and land-attack weaponry throughout the fleet at minimal cost. Distributing firepower beyond capital ships is the idea propelling “distributed lethality,” the navy’s latest operational concept. What distributed lethality means, in effect, is this: arm ships. Arm lots of them. Empower them—and knit them into a battle force that disperses combat power among many firing platforms.

Bewilder and pummel the foe.

This makes good strategic sense. Being stronger when it matters, where it matters is the arbiter of success in high-seas battle. A fleet that disperses its strength to many points of the compass yet can still mass superior strength at the decisive time and place is the likely victor in action. So much the better if spreading around fighting power softens the brunt of enemy counterattacks. Making U.S. Navy task forces more resilient while increasing their aggregate strength bolsters their chances of victory at sea. A hostile force may take out one firing unit; the fleet carries on.

Distributing lethality consonant with navy overseers’ vision will blur the boundary between surface combatant warships, amphibious transports, and auxiliary ships such as tankers or ammunition ships. Every ship will be a fighting ship. Master tactician Wayne Hughes beseeches ship designers to maximize the net combat power a ship delivers across its service life in order to reap maximum gain from building and operating it. When tailoring a naval task force, likewise, operational commanders should maximize the net combat power the force delivers during its lifespan.

New deck launchers should narrow the gap separating individual ships and task forces from that standard. Yet Captain Hughes would also warn against euphoria. Every ship may be a fighting ship in a distributed fleet. Every ship will not be a standalone fighting ship, equipped with sensors and fire control sufficient to detect, track, target, and engage enemy forces on its own. An amphibious or logistics vessel outfitted with ADLs will rely on information and orders from the task-force commander. Otherwise it will flounder about contributing little to the fight.

That’s because weapons boasting impressive reach and accuracy are necessary but insufficient for battle success. Observes Hughes, “scouting,” meaning the fleet’s capacity to find the enemy at a distance, constitutes another crucial ingredient in fleet tactics. So is “command-and-control,” the capacity to process and analyze the information gathered through scouting, make decisions based on that information, transcribe decisions into tactical orders, and relay those orders to firing units through dependable communications.

A fleet, in other words, is an interdependent organism. It can no more do without effective scouting and command-and-control than it can do without armaments able to mete out punishment at a distance. Distributing firepower, then, comprises the beginning—not the end—of the job. Distributed lethality must be coordinated lethality.

But why stop at arming navy gray hulls? Officialdom could take the logic of distributed lethality to its nth degree. If ADLs smudge the boundary between combatant and support ships, why not deliberately smudge the boundary between naval and non-naval shipping? Not just warships but any ship with deck space adequate to accommodate deck launchers—a coast-guard cutter, a container ship, conceivably even a fishing or pleasure craft—could become a combat asset in short order.

Send innocuous-looking vessels fanning out in waterways like, I don’t know, the South China Sea, and let potential antagonists wonder what—if anything at all—they may do in concert with U.S. and allied forces. Call this irregular force America’s adjunct battle fleet.

The United States would not be the first to deploy an adjunct fleet—far from it. Chinese Communist Party (CCP) magnates long ago conscripted the coast guard, maritime surveillance services, fishing fleet, and merchant fleet as implements of sea power. In effect non-naval ships substitute physical bulk for firepower. They can block the paths of vessels from rival nations or otherwise harass them. Betimes CCP vessels stage a “cabbage strategy.” They surround, say, a Chinese oil rig, using layers of hulls as a phalanx to fend off a Southeast Asian coast guard or navy striving to protect marine territory. Or they may surround an atoll occupied by others, “squeezing” it through a peculiar form of non-military siege. The occupants can leave or starve.

Such “gray-zone” tactics, that is, compel outmatched opponents to choose between surrendering vital aims and taking the first shot, seeing themselves branded the bullies for doing so, and facing massive retaliation when China’s world-class navy steams over the horizon. Gray-zone tactics perform an insidious alchemy—making the victim into the aggressor and the aggressor into the victim.

Clearly, recruiting non-military shipping as an arm of naval strategy opens up new strategic vistas. Let’s survey those vistas with a view toward imposing some gray-zone dilemmas of our own. For example: the adjunct fleet could work alongside regular forces to cordon off the China seas to merchant and naval traffic. Asian sea lanes are crowded with merchantmen and fishing craft of all shapes and sizes. Some, presumably, could sport adaptable deck launchers stuffed with missiles able to obstruct China’s access to the Western Pacific.

Here’s the rub. Chinese naval commanders would find it tough to track which mercantile ships belonged to the U.S. adjunct fleet and which were going about the business of business, as seafaring folk do. A merchantman floating up and down the first island chain might boast the firepower to help close the straits through the island chain—and bar China’s exit to the Pacific high seas. Or it might be unarmed and fully civilian in ownership and purpose. CCP leaders would rightfully be labeled the bullies if they targeted the innocent.

Deployed in concert with U.S. and allied air and naval forces, and with ground forces strewn along the island chain, the adjunct fleet could bring into being—to coin a phrase—a “gray zone” that would befog Beijing’s seaborne endeavors. CCP chieftains would be constantly scurrying around trying to distinguish friend from foe from bystander. They would fret constantly about the repercussions of a wrong decision. Island-chain defense would be that much stouter.

More importantly, conscious ambiguity could deter. Even if U.S. political leaders and naval commanders merely demonstrated that they might countenance arming non-military shipping, they would implant doubt in CCP minds. And, like it or not, doubt and fear represent the soul of deterrence. Think about it. Beijing would likely have warning if foreign forces hoisted an island-chain barricade. But an adjunct fleet plying the straits, the China seas, or the Western Pacific in peacetime would vex People’s Liberation Army commanders and their political masters. They would worry that a partial barricade was already in place and could be activated at any time. They could act against commercial shipping along the island chain—but then they would run the same diplomatic and military risks they have gleefully imposed on others. Let them wonder.

So, it seems, humble hardware like deck launchers could render invaluable duty in operational, strategic, and even political terms. And it could do so at trifling cost. William Tecumseh Sherman would glower with approval. In the context of his march to the sea, the Union field commander advised strategists to put the enemy on the horns of a dilemma—then gore him with one of them! Just so.