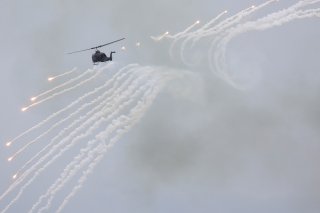 Military tension in the Taiwan Strait reached a worrying level on the weekend of 19–20 September. For several days prior, People’s Liberation Army Air Force fighters and bombers had been conducting flights through the strait and the Taiwanese Ministry of National Defence had taken the unusual step of publicising the flightpaths through social media. Then, on Saturday the 19th, Taiwanese media reported an exchange between pilots: a PLAAF pilot was challenged by the Taiwanese Air Force over crossing the median line down the middle of the Taiwan Strait and reportedly responded, ‘There is no median line.’

The position was confirmed by a Taiwanese Ministry of Foreign Affairs spokesperson when asked by a journalist the following Monday.

The exchange occurred after weeks of PLA military exercises in the Taiwan Strait, the South China Sea and the East China Sea, beginning in early August. Around Taiwan, these exercises were conducted by the Eastern Theatre Command, the combined force structure of PLA army, navy and air force established with other theatre commands in 2016 as part of a reorganisation of China’s military command structure. The Eastern Theatre Command’s area of activity extends from China’s eastern provinces over the north of Taiwan.

These activities come at a time of generally heightened regional tension. US–China relations are increasingly strained, with recent strongly worded speeches critical of Beijing made by senior US administration figures. Both the US presidential election campaign and China’s opaque but intense domestic politics make moderation more difficult from either side on any of the wide range of issues besetting the relationship.

The US has also been signalling stronger support for Taiwan for many years, including with official statements and high-profile but calibrated visits by US administration officials. Proximate to the start of PLA military exercises in August was a visit to Taiwan by US Health and Human Services Secretary Henry Azar. Similarly, the recent military flights coincided with a visit by US Under Secretary of State for Economic Growth, Energy, and the Environment Keith Krach. The visit was for the funeral service of former president Lee Teng-hui but also came after a major concession from Taiwan on beef and pork imports that had long irritated the Office of the US Trade Representative.

Cross-strait relations have been in a dynamic of statement and counter-statement since President Xi Jinping’s speech on Taiwan on the morning of 2 January 2019 and President Tsai Ing-wen’s speech in response the same afternoon. This opens the military flights to different interpretations. They can be understood as steps in a symbolic ratcheting up of US–China hostility over Taiwan for which there is no clear mechanism of reversal, and which could continue to escalate. They can also be seen as systematic tests by the PLAAF of its capabilities and of Taiwanese military responses.

PLAAF flights over the median line have been made several times since 2019, so they can also be interpreted as a tactical normalisation of military flights by Beijing and the PLA. The aim could be to gradually move the tacit median line towards Taiwan to expand the area of activity by the air force and other services in the Taiwan Strait. Such a move would follow the pattern of similar tactics used in the South China Sea over many years.

No one interpretation excludes another, and, for its part, the government in Taipei has been typically cool in its response. Tsai was strongly critical of the exercises, framing them in terms of Beijing’s aspirations of power and Taipei’s efforts to strengthen its own international relationships, saying that, thanks to this latest round of PLA drills, ‘other countries in the region also have a better understanding of the threat posed by China’. At the same time, she declined a reported proposal from Japan to speak directly to incoming prime minister Yoshihide Suga, forgoing an opportunity to strengthen Japan–Taiwan relations, but avoiding antagonising Beijing.

The Taiwan Strait will remain a region of calculated risk and tactics from all its players, especially as the US presidential election draws nearer.