Terrific 12: The Navy Has Plans for Its Columbia-Class Submarines 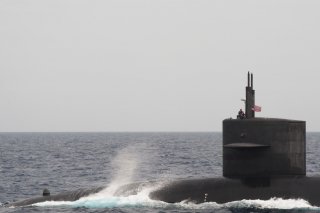 Here's What You Need to Remember: These factors point to the key issue of consistent, fluid mission maintenance and deployment longevity; given that the Columbias are expected to serve throughout most of the remainder of this century, careful planning and thorough consideration must be given to maintaining them for decades into the future.

The main reason is due to new “life of core” nuclear reactor technology now being built into the Columbia-class boat, a development which means the ballistic missile submarines will not have to dock for a year or two for what’s called “mid-life refueling,” therefore enabling submarines to remain operational and mission ready more continuously.

“They will have to come off line periodically. However, the amount of time they have to be off line will be decreased, because a mid-life overhaul goes away. We can keep the same number at sea that are needed per the requirement with twelve Columbia-class submarines,” Wolfe said.

There are a certain number of nuclear-armed ballistic missile submarines which are required to be on patrol to ensure a devastating, reactive second strike in the event the United States suffers an unforeseen catastrophic nuclear attack. The assured annihilation of any would-be attacker, the thinking goes, prevents an attack, therefore keeping the peace. The world’s most destructive and sophisticated weapon is built for the specific purpose of never having to be used. The exact number of submarines on patrol at any one given time, or the nature of their missions are naturally not available for security reasons, yet the concept of a sustained undersea nuclear deterrence “presence” is certainly well understood. Interestingly, the global threat environment has led some to speculate that it might even be possible to envision a scenario wherein the Navy builds more than twelve Columbias. However, Wolfe was clear to stress that there are innovations built into the Columbia which, when combined with the proper maintenance and sustainment, can ensure mission success with twelve.

These factors point to the key issue of consistent, fluid mission maintenance and deployment longevity; given that the Columbias are expected to serve throughout most of the remainder of this century, careful planning and thorough consideration must be given to maintaining them for decades into the future. Moreover, these new boats can’t be arriving soon enough, given that the existing Ohio class is already serving years beyond its intended service life.

“The Ohios will age out, as there comes a point where you can’t just extend them. There are limitations for that type of hull and reactor,” Wolf said.