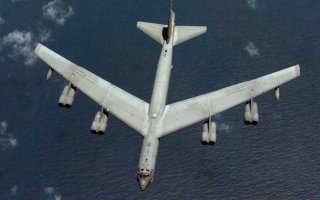 Here's What You Need to Know: The U.S. has had many close calls.

As the numbers of nuclear weapons in the U.S. arsenal grew quickly during the early years of the Cold War, so did the number of accidents involving nukes.

A B-47 carrying two nuclear capsules missed a rendezvous with a refueling tanker over the Mediterranean. The aircraft was never found, nor were its atomic “capsules.” Early nuclear weapons had a removable capsule containing the nuclear fissile material. It was U.S. Air Force policy not to insert the capsules into the bombs as a safety measure, short of a war emergency or crisis.

While making a touch and go landing at Lakenheath Royal Air Force Station in England, a B-47 went out of control and slid off the runway into a nuclear weapons storage igloo containing three nuclear bombs. None exploded but all had to be shipped back to the United States for repairs.

The crew of a B-36 transferring a Mk-17 hydrogen bomb to Kirkland Air Force Base in New Mexico, accidentally released the bomb on final approach. The device crashed through the closed bomb bay doors and exploded upon striking the ground, causing a crater 12 feet deep and 25 feet in diameter. Some contamination was detected in the crater.

A mechanical failure caused a B-47 to crash during take-off. A fuel tank ruptured, causing a massive fire. The plane carried a strike-ready bomb but it didn’t explode during the fire. Contamination was later detected on a fire truck and one firefighter’s clothing.

An F-86 fighter collided with a nuke-carrying B-47 during a training mission near Hunter Air Force Base in Georgia. The crew tried to land three times. After the third attempt the fliers decided to jettison the bomb casing off shore near Tybee Beach. The plane landed safely afterward. The bomb casing is still lost offshore.

A B-52 on airborne alert suffered a wing failure over Goldsboro, North Carolina. When the plane broke apart its two nuclear bombs came free. One landed gently via parachute while the other impacted in a swampy, quicksand-like piece of farmland and broke apart. The pieces sank into the ground, requiring the Air Force to excavate.

Despite workers digging down 50 feet, one piece was never located. The government bought an easement for the property requiring permission before anyone could dig there.

As the carrier USS Ticonderoga was steaming from Vietnam to Japan, an A-4 Skyhawk armed with a B-43 hydrogen bomb rolled off one of the carrier’s elevators into the ocean. Bomb, plane and pilot were all lost in over 16,000 feet of water and never recovered. When the government finally copped to the incident in 1989, it caused a diplomatic incident with Japan, as the bomb lay around 60 miles off the coast of Okinawa.

In what is perhaps the best-known nuclear weapons accident, a B-52 collided with a KC-135 tanker over Palomares, Spain. It was carrying four B-28 bombs. Two suffered detonations of their conventional explosives on impact, scattering radioactive material over a wide area and requiring a large clean-up operation.

The third parachuted safely to the ground while the last landed in the Mediterranean. A massive search involving midget submarines finally located the last bomb on April 7, 1966. The bomb that landed intact is now on display at the National Atomic Museum in Albuquerque, New Mexico.

A B-52 crashed seven miles short of the runway at Thule, Greenland. All four of its bombs were destroyed in the subsequent fire and radioactive material was scattered over a wide area resulting in an expensive cleanup. After the accident, Secretary of Defense McNamara decreed that U.S. aircraft would no longer take off with a live nuclear weapon aboard except during a crisis.

A Titan II ICBM exploded in its silo, killing an airman and injuring 21 others. The warhead was thrown 200 yards into a nearby field.