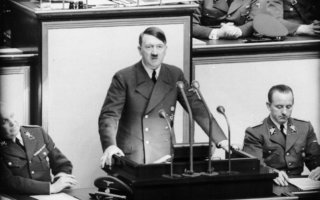 Key Point: Hitler understood the power of place and theatrics in influencing the masses.

When Nazi architect Albert Speer surrendered in 1945, he made A strange remark: “So now the end has come. That’s good. It was all only a kind of opera anyway.”

Minister for Popular Enlightenment and Propaganda Josef Goebbels agreed that Hitler turned politics into a grand play. Even the Führer called himself “the greatest actor in Europe,” enjoying contact with movie stars while plunging the world into a melodrama of madness. Through years of political propaganda, theatrical trappings, and charismatic speaking, this vagrant beer hall agitator became what biographer Alan Bullock called “the greatest demagogue in history.” During his rise to power, Hiter warned that the German people “must not be allowed to find out who I am. They must not know where I came from and who my family is.”

The blurred youth of Adolf Hitler set the stage for his meteoric rise to power after World War I. His harsh Austrian father Alois (Schicklgruber was the original family name) earned a middle-class income as chief customs official in Linz, the Austrian town Hitler later wanted to make the Reich’s cultural capital. Clara, his indulgent mother who died of cancer, called her thin, pale-faced, irascible boy “moonstruck” because he lived in a dream world.

Childhood friend August Kubizek later wrote that Adolf showed “a gift for oratory from his earliest youth. And he knew it. He liked to talk, and talked without pause. Sometimes when he soared too high in his fantasies I could not help suspecting that all this was nothing but an exercise in oratory.”

A teacher in Linz also remembered “Hitler holding duologues with trees stirring in the wind.” And in his book Mein Kampf jailbird Hitler reminisced that his “oratorical talent was being developed in the form of more or less violent arguments with my schoolmates.”

Hitler drifted to Vienna, selling watercolors and painted postcards on the street after twice failing the entrance exam to the Academy of Fine Arts—a slight that, coupled with his mother’s death, left unhealed scar tissue. Interestlingy, evidence of anti-Semitic hatred in Hitler seems slim before the end of World War I. Even then the social misfit with “lightning in his eyes” would jump to his feet and rave about Socialists, “not avoiding vulgarisms, in a very impetuous way” while dabbing paint on canvas and waving a T-square in the air. The budding artist sometimes sketched soap advertising posters, one showing black boots with a red background and white letters, colors later part of the Nazi flag. Hitler called these difficult days his “granite foundation.”

Vienna planted the seeds for Hitler’s perverse political platform through access to cheap printed material. He skimmed books, newspapers, pamphlets, the magazine Ostara, and the illustrated monthly Der Scherer, generally publications that supported his deluded ideas. Two arcane German writers, Guido von List and Jorg Lanz von Libenfels, helped feed fantasies of a glorious Germanic past full of pageantry and pagan rituals. It is also likely that he read Protocols of the Wise Men of Zion and Houston Stewart Chamberlain’s The Foundations of the Twentieth Century. Hitler also liked the romantic Western cowboy and Indian novels of Karl May.

It is probable that Hitler stayed in Vienna to avoid the draft. He returned to Munich when conditions seemed safe, but the Army summoned him for an examination. Military doctors found the future Army commander “not strong enough for combatant and non-combatant duties,” and rejected him as “unfit for military service.” Nevertheless, he managed to join the Bavarian Army and served as a regimental dispatch runner. Before the end of World War I, Hitler was gassed and injured. He recovered in a hospital where the psychiatric department labeled him a psychopath with hysterical symptoms. He did receive the Iron Cross twice but never rose above corporal (actually a private) because superiors felt this oddball lacked leadership qualities.

Germany became an economic wasteland after World War I. Out of this rubble rose magicians and messiahs, but the National Workers Party hit the jackpot with Hitler, lashing at communists, capitalists, intellectuals, trusts and monopolies, the French, the Polish and Jews, anything to create mass frenzy through fear.

After the war, Hitler returned to Munich and became involved in the Bavarian Soviet Republic. Film footage shows him marching at a funeral, head high, with an armband the color of the Socialist revolution. He remained in the army and did guard duty at a POW camp and train station. The Information Department offered “speaker courses” as training tools for troops. An instructor recalled, “The men seemed spellbound by one of their number who was haranguing them with mounting passion in a strangely guttural voice. I had the peculiar feeling that their excitement derived from him and at the same time they, in turn, were inspiring him.”

Officer Karl Mayr heard about Hitler’s oratorical skills and enlisted him as an undercover agent. “He was like a tired stray dog looking for a master” and “ready to throw in his lot with anyone who should show him kindness.”

Mayr later wrote: “He was totally unconcerned about the German people and their destinies.” The beer hall stumper spoke on topics such as “Social and Economic-Political Slogans.” Some soldiers found his talks “spirited,” one calling him “a born popular speaker.” Hitler exclaimed in Mein Kampf, “I could speak.”

He soon realized this talent paved the road to profit. August Kubizek read about his oratory in the 20s and recalled, “I was very sorry that he had no more been able to follow through with his artistic career than I had.… Now he had to make a living as a speaker at assemblies. Tough job.”

Mayr also used Hitler as a stooge to attend meetings of radical political parties in Munich. One group was called the DAP (German Workers Party, later changed to National Socialist German Workers Party, shortened to Nazi). Instead of observing, he shouted down a guest speaker and gained attention, leading the party’s founder to remark, “He has a big mouth. We could use him.”

Hitler joined the splinter group in 1919 and soon handled party propaganda, seeing himself as a drummer for the great revolution yet rapidly becoming the outspoken party voice. In 1920, for example, he roused crowds at over 30 mass meetings. The next year he spoke to over 6,000 members at Munich’s largest hall, and in 1922 an audience of 50,000 at a Nazi rally in Munich. Hitler may have been obscure in most of Germany, but not among diehard Nazis whose number soon reached 55,000. As businessman Kurt G.W. Ludecke recalled, “His words were like a scourge. When he spoke of the disgrace of Germany, I felt ready to spring on any enemy.”

During this incubating period, Hitler designed symbols for the Nazi party, most derived from earlier sources. A crooked cross called the swastika, black in a white circle with a blood-red field used as part of the esoteric Thule Society’s emblem, appeared for the first time in 1920.

Hypnotist, clairvoyant, and stage magician Erik Jan Hanussen is often overlooked as an influence on Hitler’s speaking style. Former Nazi ranking member Otto Strasser told a psychoanalyst in 1942, “Hitler took regular lessons in speaking and in mass psychology from a man named Hanussen, who was also a practicing astrologer and fortune-teller. He was an extremely clever individual who taught Hitler a great deal concerning the importance of staging meetings to obtain the greatest dramatic effect.” The Führer learned crowd control through gestures and the use of garish poses from Hanussen, who was later murdered by Nazis.

Pretty soon the unemployed young orator rode around in a Mercedes convertible carrying a rhinoceros whip and wearing a hat and long raincoat. Admirers called this carnival sideshow barker Germany’s young messiah and Germany’s Mussolini. Yet he still insisted, “I am nothing but a drummer and a rallier.” That soon changed.

The Publicized Putsch in Munich

Many saviors preached to Germans after World War I to gain political power. Papers often reported street fights, plots, and putsches to overthrow the government. On November 8, 1923, several thousand people packed a large Munich beer hall to hear the prime minister of Bavaria speak. Suddenly, the doors flew open and Hitler, flanked by storm troopers, entered with a holstered Browning revolver. He leaped on a beer table, fired a shot into the ceiling, and took politicians hostage. A heated oration ensued. The shaking, sweating Hitler screamed, causing beer drinkers to applaud. One spectator thought the hoarse, unshaven future Führer looked like “a poor little waiter.”

Snow and rain began to fall outside. Traffic stopped. Thugs with guns and clubs patrolled side streets. Yet, Hitler failed to take over government buildings, the railway station, and phone exchanges. Former World War I general Erich Ludendorff made the mistake of letting hostages go free on their honor. The ill-conceived putsch petered out by morning when Ludendorff decided to organize a protest march downtown. Hitler bought the idea. Gunfire broke out with state police. When the smoke cleared, over a dozen Nazis had been killed or wounded. Hitler fled in a yellow Opel and hid in a rich supporter’s attic, threatening to commit suicide.