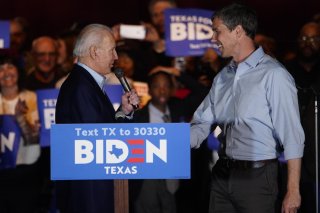 On June 1, Joe Biden and a host of Democratic Party luminaries, including Nancy Pelosi and several of Biden’s former rivals for the nomination, will address the Texas Democratic Party’s virtual convention. The state is a major electoral prize in the presidential contest, and a victory for Biden there would be a stunner. His campaign team has talked about expanding the political map to include Texas, with the expectation that the state will continue to move in the Democratic direction as it did between 2016 and 2020.

Recent polls on the presidential contest don’t provide a clear picture and there is a long way to go. In the latest poll from Emerson College poll from early May, Trump has a 47 to 41 percent lead over Biden. Trump has a 46 percent approval rating in the state; Republican governor Gregg Abbott is at 54 percent. Perhaps more important — and a possible explanation for Biden’s visit — are the responses in the poll to a question about excitement about voting in November. Sixty-seven percent of Trump voter say they are extremely or very excited; only 40 percent of Biden voters give that response. And 61 percent of Texans expect Trump to win. So while Texas is a potential new battleground state, the early evidence suggests it will stay in the Republican column.

Nor does the Senate contest there suggest a new political landscape. Most handicappers put incumbent Senator John Cornyn’s seat in the “likely Republican” column, meaning the race is not considered competitive now but could become so later. For some perspective, the Cook Political Report also puts Senators Mitch McConnell and Lindsey Graham in the same likely Republican category.

On the Democratic side, there will be a runoff on July 14 between MJ Hegar and Royce West to face Cornyn in the general. Hegar won the primary with 22 percent of the vote in a 12-person primary, which was not enough to avoid a runoff. Hegar has more money, but West has deeper ties in the state, having served in the State Senate there since 1992. Hegar is trying to frame the contest as an outsider ready to disrupt the status quo vs. an insider and life-long politician. According to Ballotpedia, no Democratic candidate has won a statewide election in Texas since 1994.

Texas has 36 members in the US House of Representatives — 23 Republicans and 13 Democrats. There are a handful of competitive House seats, but the races for the State House are even more likely to provide clues about Texas’s political future. The Texas Tribune reports that 30 of the state’s 150 House seats could be competitive this fall. There are currently 83 Republicans and 67 Democrats in the State House. The Republican advantage dimmed in 2018 when the party lost 12 seats. If the Lone Star State is becoming more competitive nationally, one of the places where we may see the evidence this fall is in these contests.

Learn more: Memorial Day and veterans in politics | Counting votes accurately and fairly | AEI Political Report: How COVID-19 is changing us, voting in November, sexual misconduct and politicians, and China

This article by Karlyn Bowman first appeared in AEIdeas on May 29, 2020.