Thanks To Coronavirus, Tensions Are Rising In The South China Sea 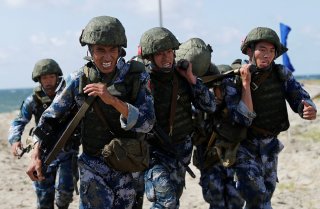 Here's What You Need To Remember: Isolating your opponent is a necessary precursor to waging limited war. It simplifies matters before a one-on-one fight, skews the balance of forces in your favor, and thus lifts your chances of a quick, clean triumph. The U.S.-Japan alliance has not fractured diplomatically, but Beijing might conclude that it has fractured militarily—albeit temporarily—as Japan’s ally battles the coronavirus and takes ships and aircraft offline.

On March 30 a destroyer from the Japan Maritime Self-Defense Force collided with a Chinese fishing boat on the high seas in the East China Sea. Details remain sketchy, but the collision came on the heels of a similar collision between a Taiwan Coast Guard vessel and a mainland fishing boat. The incident also came scant days before a China Coast Guard cutter rammed and sank a Vietnamese fishing boat in the Paracel Islands.

Look to the masters. Sci-fi genius Robert Heinlein warned readers never to attribute to villainy behavior that was adequately explained by stupidity. In other words, he believed malice should be the explanation of last resort for puzzling conduct on the part of people or groups of people; it shouldn’t be the default. Better to hunt for more benign explanations first. With apologies to Heinlein, I would amend his “razor,” or heuristic, slightly. It’s too narrow. There are other candidates than stupidity or purposeful villainy to account for misconduct. Factors like incompetence, bureaucratic inertia, and sheer accident form—and sometimes deform—human thought and action. They belong on the stupidity side of Heinlein’s ledger.

How about this: Never attribute to villainy behavior that can be adequately explained by human failings. That preserves the essence of Heinlein’s razor while widening its scope to fit reality.

Let’s use his revised heuristic to evaluate the Sino-Japanese collision. It’s certainly possible the mishap came about by accident. It took place at night, in crowded waters. If the U.S. Navy collisions of 2017 taught us nothing else, it’s that the crews of even frontline warships can suffer from a host of maladies, from overwork to shoddy personnel practices to doctrinal or training shortfalls. No amount of high technology—whether it’s Aegis radar or satellite navigation—can altogether forestall human error. It may be that the Japanese crew, the Chinese crew, or both blundered around in the dark and came to grief. By Heinlein’s lights that’s the generous and proper assumption until the facts become known. If they do.

Nevertheless, a silent corollary has to be appended to Heinlein’s razor: But don’t rule out villainy, either.

Especially when it comes to the Chinese Communist Party (CCP). For decades Beijing has made militiamen embedded in the Chinese fishing fleet an arm of maritime strategy. The maritime militia is an irregular adjunct to regular naval forces, including the People’s Liberation Army Navy (PLA Navy) and especially the musclebound China Coast Guard fielded over the past decade. Beijing touted the militia’s combat prowess as long ago as 1974, when Chinese naval forces wrested a tottering South Vietnam’s holdings in the Paracel Islands from it in a brief but bloody sea battle. Militia craft backed by the coast guard have been a fixture in the South China Sea ever since 2009, when Beijing declared “indisputable sovereignty” over the vast majority of that body of water—including seas allocated to its neighbors by treaty. The irregular force went into overdrive in 2012 during the standoff with the Philippine Navy and Coast Guard at Scarborough Shoal, deep within the Philippines’ exclusive economic zone. Fishing craft flood the zone in CCP-claimed waters and dare local coast guards or navies to repulse them. If the locals resist, the China Coast Guard backs up the militia. PLA regular forces provide a backstop should things go awry.

But it’s not just weaker opponents. Over the past decade militia trawlers and coast-guard cutters have become a familiar feature of the seascape around the Senkaku Islands, an uninhabited archipelago northeast of Taiwan. So common is their presence in these waters that, in practical terms, CCP potentates can claim to exercise a sort of joint administration there, alongside Tokyo. Staking that claim could constitute a precursor to an effort to seize the islets themselves. Fear of a Chinese amphibious assault has prompted Japanese sea and air forces to step up their own presence around the islets—reinforcing Japanese sovereign rights while deterring aggression. It has also prompted the Japan Ground Self-Defense Force to institute an island-hopping “dynamic joint defense force” to evict invaders should Japan’s southwestern islands, including the Senkakus, come under attack.

Which suits PLA commanders just fine. They realize that Japan must match the Chinese presence, and that Chinese forces enjoy a hefty advantage in numbers. In other words, the China Coast Guard, maritime militia, and PLA Navy can sustain a sizable presence in embattled waters without breaking a sweat. Meanwhile the Japan Coast Guard and Maritime Self-Defense Force labor to keep pace. They must deploy a bigger share of their less numerous fleets to police the contested seas. Constant deployment takes its toll on crews and hulls over time, as crews spend more and more time at sea and it becomes harder and harder to find time to overhaul vessels. The PLA can wear down Japanese forces over time simply by being on the scene.

This approach is true to Chinese strategic traditions. The classical Chinese strategist Sun Tzu exhorts generals to use crack troops to keep the foe “under a strain and wear him down” through maneuver and deception. The victor, proclaims Master Sun, exhausts the vanquished “by causing him continually to run about.” An enemy weary from constantly scurrying around is an enemy apt to crumble when struck a sharp blow. Such a fate could befall Japanese island defenders if they have to sustain uptempo operations for too long.

Speaking of deception, founding CCP chairman Mao Zedong, who etched his ideas about military strategy onto PLA culture, proclaims that there can never be too much deception in warfare. Mao drew inspiration from Sun Tzu, who advises commanders to harness “normal” and “extraordinary” forces to harry and ultimately defeat antagonists. Normal forces engage the foe in more or less frontal engagements while extraordinary forces range around the margins, striking indirectly at weak spots and furnishing the normal forces their difference-maker. “In battle,” writes Sun Tzu, “there are only the normal and extraordinary forces, but their combinations are limitless.” PLA commanders, then, combine and recombine forces in unorthodox ways to keep adversaries off-balance and weak.

The PLA Navy looks like China’s normal force, the coast guard and maritime militia like its extraordinary force. The extraordinary sea force mounts the main effort in peacetime while the normal force waits in reserve, ready to mete out heavy punishment should fighting break out. Spreading a protective umbrella over both forces is a forbidding array of shore-based missiles and aircraft, able to lend its firepower to the mix should seagoing forces—normal or extraordinary—find themselves in trouble. In effect land-based armaments comprise the PLA’s second extraordinary force, a supplement to the others. Sun Tzu’s and Mao’s hearts would glow.

Scholar Barton Whaley, the grandmaster of deception theory, illustrates the dangers the CCP’s East China Sea strategy poses for Japan. “Every deception operation,” writes Whaley, “is comprised of only two basic parts: dissimulation and simulation.” Dissimulating hides or obscures something real from the target’s eyes; simulating displays something false. If successful the deceiver substitutes a false image for the truth in opponents’ minds. Tactical, operational, or strategic advantage accrues.

Whaley terms one method of dissimulation “repackaging.” Repackaging “hides the real by disguising. It wraps a thing differently, modifying its appearance.” Beijing could repackage amphibious combat forces by, say, secreting PLA marines aboard cutters or trawlers. The irregular force cruising around the Senkakus could pack a regular punch. Beijing could repackage malign intentions by keeping up operations around the Senkakus, much as it has done over the past decade. This strategy generates the image of a CCP content to compete with Tokyo for jurisdiction over the islands without fighting for them. In Whaley’s words, it “feigns normalcy” in coast-guard and fishing-fleet operations. The more China lulls Japan into regarding its presence around the archipelago as mundane, the better its chances of delivering a sudden, crushing strike.

“Decoying” is one technique for simulation. Decoying, says Whaley, “shows the false by diverting attention.” Chinese mariners could divert Tokyo’s attention away from the Senkakus by doing something—or multiple somethings—somewhere else on the map. Something like, say, arranging a collision with a vessel from Japan’s navy. Decoy operations, presumably mounted by China’s extraordinary force, would not just deflect Japanese attention from the Senkakus but siphon away Japanese resources as well. In the tradition of Sun Tzu and Mao, Chinese militiamen and coastguardsmen could enfeeble Japanese forces at the scene of impact—bolstering China’s relative standing before a decisive action.

Chinese deception, in sum, could be designed to tire out Japanese seafarers, lull them into complacency, and distract them by staging events well away from the prospective battleground. Then—bang.