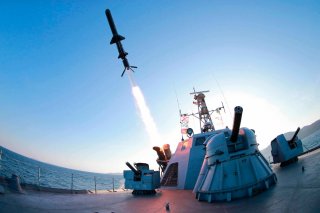 Here's What You Need To Remember: It’s not surprising that Argentina opted not to develop Horten’s cruise missile. But if it had, and if it managed to acquire appropriate radars and motors, with the Horten flying bomb Argentina could have been a world leader.

Argentina was almost the first country to develop a small, supersonic cruise missile. Way back in 1960.

On May 30 of that year, Dr. Reimar Horten — a former warplane designer for Nazi Germany — met with officials at the Aerotechnical Institute of Argentina’s Military Aircraft Factory, or FMA, to propose what he described as “supersonic flying bomb.”

Horten had emigrated to Argentina after World War II, leaving behind his brother, an equally accomplished aeronautical engineer.

Although Horten cast his flying bomb as a logical evolution of Germany’s wartime V-1 buzz bomb, in concept it had more in common with today’s supersonic cruise missiles.

Horten’s missile never got past the concept stage — fortunately, perhaps, for British forces that would battle the Argentine military 22 years later.

Horten’s proposed missile was 15 feet, nine inches long, had a delta-wing configuration and was powered by a Rolls Royce Soar turbine that was fed by a supersonic axisymmetric air intake located around the missile body in a rather unconventional backward position.

The nose of Horten’s missile contained a radar and navigation equipment. The delta wing held the kerosene fuel. This wing had a symmetrical profile with a sharp leading edge, giving the flying bomb a top speed of Mach 2.5.

Argentina had actually begun testing supersonic wings as early as 1953 at the FMA’s new wind tunnel, hoping to fit them to the I.A. 37 and I.A. 48 fighters that Horten also helped to design. Testers determined that the ideal wing profile for the I.A. 37 was one with 10-percent thickness at 40 percent of the chord.

Argentina canceled both of Horten’s fighters in 1960.

Although Horten’s missile never got tested in the wind tunnel, it’s likely that some of the profiles tested for the I.A. 37 and I.A. 48 influenced the missile’s own profile.

In order to control the missile in flight, two small triangular drifts — equipped with small rudders for directional control — were located in both winglets. The wings were to be equipped with elevators.

Horten wanted to produce a supersonic missile with a reasonable war load and range. That explained the comparatively small size of his proposed design. He expected to obtain supersonic speed with the thrust of an existing powerplant, meaning the missile had to fall within certain weight, geometry and aerodynamic parameters.

Horten’s flying bomb launched from a solid-rocket-boosted trolley that ascended a 40-foot-long ramp. It could travel as far as 270 miles in its standard configuration, and Horten proposed to add range by reducing the weight of the warhead. Cutting the explosive load from 1,100 pounds to 660 pounds boosted the range to 540 miles.

Horten also proposed an air-launched version of the missile that could travel the maximum 540-mile range with the full, 1,100-pound warhead. By 1960, the only aircraft in Argentine air force service that could carry Horten’s flying bomb were World War II-vintage Lancaster and Lincoln bombers — albeit with extensive modifications to the bombers.

By the early 1960s, the Lancaster and Lincoln bombers already considered obsolete. By 1967, Argentine retired both models. In late 1970, the country acquired British-made Canberra jet bombers that could have carried Horten’s missile, had the missile ever become more than a mere concept.

Once launched, the missile was guided at first by radio — for direction — and gyroscopes to control altitude and roll. At cruising height, the gyroscopes and aneroid capsules combined with chronometers to fix the trajectory. In close proximity to the target, the on-board radar equipment took over guidance.

Horten’s 1960 report doesn’t specify what type of radar equipment the missile would carry or who would supply it. At the time, Argentina lacked the industrial base to produce its own miniature radars. Equally problematic, foreign supplies may very well have faced embargo by their own governments.

Some of the same problems affected the flying bomb’s powerplant. Horten proposed to fit the missile with the Rolls Royce Soar, a small disposable, axial-flow turbojet developed in the United Kingdom in the 1950s.

The Soar motor was relatively simple and could be stored for long periods with little maintenance. It was good for only 10 hours of flight. The British military intended to fit the Soar to the Vickers Red Rapier missile, but London canceled the Red Rapier in 1953.

It’s not clear the Argentina would have succeeded in importing Soar engines. The United Kingdom canceled the Soar project in 1965.

Undoubtedly, Horten’s missile was revolutionary. It also promised to be very, very expensive. At the time, the FMA was developing of the I.A. 37 and I.A. 48 and manufacturing the I.A. 35 and other planes. Leaving aside the import restrictions, completing a flying bomb would likely have proved beyond the FMA’s means.

So it’s not surprising that Argentina opted not to develop Horten’s cruise missile.

But if it had, and if it managed to acquire appropriate radars and motors, with the Horten flying bomb Argentina could have been a world leader. There were no other missiles in this category at this time. America’s Martin Mace and Matador were subsonic. The Northrop Snark and North American Navaho were strategic cruise missiles.

The closest things in America to Horten’s project were the submarine-launched Rigel, Triton and Regulus missiles. But these were much larger weapons. The same was true of Soviet turbojet missiles such as the KS-1, K-10S and K-20.