Thanks to Russia, U.S. Pilots Had Some Close Calls Over Syria 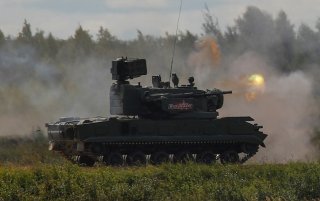 Here's What You Need To Remember: For man-portable anti-aircraft missiles, Russia is developing a command and control vehicle for the commanders of air defense platoons. In addition, an air defense training complex will use remote-controlled targets to simulate jets, cruise missile, tactical UAVs and hovering attack helicopters.

U.S. pilots allegedly got the shakes when Russia's advanced S-300V4 air defense systems tracked them at ranges of 200 to 300 kilometers (125 to 186 miles), Lt. Gen. Alexander Leonov, chief of Russia's air defense forces, told Izvestia (Google translation here). The aircraft types were not specified, though the United States has flown multiple models over Syria, including the F-22, F-15, F-18 and drones.

Leonov said the S-300V4 was deployed to Syria in 2016 to expand control of the airspace over eastern Syria, as well as to prevent enemy attacks on the Khmeimim airfield and the supply base at the port of Tartus. Leonov did not specify which enemies the missile batteries were supposed to defend against: the Syrian rebels lack aircraft, while U.S. and Israeli planes operate over Syria.

Leonov also touted improvements in Russian air defense. "Since 2014, the latest modification of the S-300V4 long-range antiaircraft missile system, the most long-range in its class, has come into service," he told TASS. The upgraded S-300V4 missiles are more lethal against aircraft and ballistic missiles.

Russia has also improved the Buk medium-range SAM system, including upgraded radar for the Buk-M2 model with better detection capabilities for aircraft and cruise missiles flying at extremely low level, said Leonov. Since 2016, the Russian military has been receiving the latest version of the Buk-MZ. "Due to their multifunctional radar station with a phased array antenna and new missiles, the Buk-MZ systems are two to three times superior to the capabilities of the previous SAM systems of this class," Leonov added. "One self-propelled unit can fire on up to six targets."

Leonov described several ongoing development projects for air defense. The Arctic version of the Tor-M2, mounted on cross-country tractors, will be fielded next year. A replacement is being developed for the venerable ZSU-23-4 Shilka self-propelled anti-aircraft gun—reportedly a 57mm weapon—which Leonov said will be more survivable than the Shilka because it uses passive rather than active sensors.

For man-portable anti-aircraft missiles, Russia is developing a command and control vehicle for the commanders of air defense platoons. In addition, an air defense training complex will use remote-controlled targets to simulate jets, cruise missile, tactical UAVs and hovering attack helicopters.

Michael Peck, a frequent contributor to TNI, is a defense and historical writer based in Oregon. His work has appeared in Foreign Policy, WarIsBoring and many other fine publications. He can be found on Twitter and Facebook. This article first appeared in 2018.