"That's News to Me": Washington Governor Inslee Doesn't Know About the Anarchist Takeover of Downtown Seattle 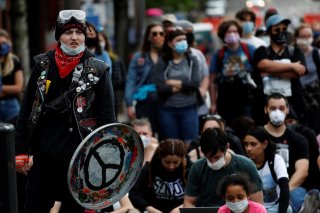 Democratic Washington Gov. Jay Inslee said he was not aware of Seattle rioters seizing a portion of the city during a press conference Wednesday.

“Well that’s news to me. So I’ll have to reserve any comment about that — I have not heard anything about that,” Inslee told a reporter when asked about the situation.

A large group of demonstrators reportedly took control of an area around Seattle’s abandoned East Police Precinct. Activists fenced in the six-block span of the city and named it the Capitol Hill Autonomous Zone, according to Newsweek.

A banner over the zone reads “This space is now property of the people,” Newsweek reported.

Some are reportedly extorting both citizens and business in the area, according to Newsweek.

“We have heard anecdotally reports of citizens and businesses being asked to pay a fee to operate within this area, this is the crime of extortion,” Assistant Seattle Police Chief Deanna Nollette said, according to Newsweek.

These actions come amid nationwide riots, following the death of George Floyd, who died after a Minneapolis police officer knelt on his neck for over 8 minutes, viral video shows.

President Trump likened the demonstrators behind the autonomous zone to “Domestic Terrorists” in a Tweet Wednesday night.