That's Weird: Could China Be Getting an Atlantic Fleet? 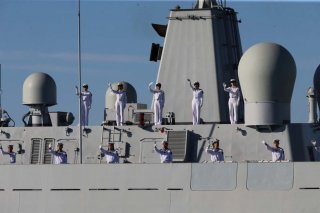 Here's What You Need to Remember: While maritime economic resources and trade are cited as the first reason why Beijing should lean forward in the Atlantic, there is disturbing evidence in this article that strategic questions are assessed in Beijing to be ever more acute.

In yet another sign that a New Cold War is in the offing, more evidence is emerging that Beijing will indeed seek a global military footprint and will not be content to be a mere regional leader. With regular naval sorties going back more than a decade into the Indian Ocean, a new base in East Africa, and ever more common hints about possible future submarine deployments to the Arctic, this trend is not abrupt or unexpected.

But what of the Atlantic? Will the Chinese Navy dare to dip its toe into the very wellspring of American might? It’s not coincidental, after all, that the West’s premier military alliance is called the North Atlantic Treaty Organization (NATO). Back in 2017, I revealed a remarkable Chinese research article from an official source that stated candidly that China must pursue an “Atlantic Strategy,” asserting that Beijing should enter the Atlantic to “break the American maritime blockade and develop China’s maritime ‘exterior line’ [打破美国海洋封锁, 发展中国海洋‘外线战略’].” Two years later, a follow-up story appeared in the same official journal, Ocean Development and Management [海洋发展与管理] of the State Oceanic Administration. It is likely not coincidental that this article is once again the lead article in the journal, bespeaking its importance.

This Chinese analysis sounds many of the same themes as its predecessor, arguing that the issue is now significantly more urgent for Beijing, since the advent of the Trump Administration’s hardline policies toward China. However, it’s also interesting to consider what ideas from that former piece have seemingly been dropped from the later iteration, which presumably represents a refinement of the strategy. One conceptual innovation that is repeated several times in the new piece is that of the Atlantic affording China with greater “strategic space [战略空间].” Indeed, that objective is even noted dramatically in the paper’s title, actually.

Underlining the importance of maritime strategy in determining the historical evolution of Europe, the piece offers the example of the Strait of Gibraltar [直布罗陀海峡] as a key source of Britain’s might. Likewise, supremacy on the Atlantic has often correlated well with the rise and fall of various Western sea powers, according to the authors. To be sure, the authors are careful to note that China has no “wild ambitions” to attain global hegemony. Moreover, they admit that the Atlantic is “relatively distant from our country.” Nevertheless, it is maintained that “from a comprehensive understanding of maritime strategy and the extension of oceanic interests to distant areas, the Atlantic has great significance for the future of Chinese maritime strategy [从海洋战略的整体性和海上利益拓展的长远性来看, 大西洋对于中国未来的海洋战略具有重要意义].”

While maritime economic resources and trade are cited as the first reason why Beijing should lean forward in the Atlantic, there is disturbing evidence in this article that strategic questions are assessed in Beijing to be ever more acute. Indeed, a major impetus for this strategy is said to be the strategic choice of certain countries to engage within the “Indo-Pacific” strategy in order to “encircle [围堵]” China. In particular, these authors identify the December 2017 announcement by the United States that China constitutes America’s greatest security challenge and the related attempt to allegedly “exaggerate” the threat Beijing poses to the whole Pacific region. These authors decry perceived efforts by the United States to coordinate with Japan, Australia, India and other nations as using the Indo-Pacific strategy to “contain China’s development.”

Keeping that perceived threat in mind, these Chinese strategists, therefore, take a greater interest in “America’s advantageous strategic interior,” which is said to hold major significance. “Confronting a situation in which America increases pressure and containment of our country’s strategic space, the Atlantic will become our country’s new deep-sea development and far seas power strategic penetration space [面对美国加紧对我国海洋空间战略进行挤压和围堵的现状, 大西洋将成为我国发展深海, 远海力量新的战略的纵深空间].”

As mentioned above, important segments of the article emphasize economic and foreign policy tools and goals. The tariffs imposed by the Trump Administration on China are cited as yet another reason for China’s major outreach to the Atlantic, for example. Although it is stated that major European countries, including the UK, France, and Germany have all sought to limit Chinese investment, the imperative to stabilize trade and investment relationships with countries in the North Atlantic is described as having “huge development significance [发展意义重大]” for China. Beijing’s activities in Iceland and Greenland both are conspicuously mentioned in this analysis. At the same time, the authors recognize that the greatest opportunities in the future may well be together with both African and Latin American states that border on the South Atlantic. The analysis lauds the creation of “strategic partnership relations” with countries, such as Brazil and Venezuela. A Brazil-Cameroon undersea cable project and a Namibian highway construction project are cited as examples of such many possibilities. But Beijing also seeks further “breakthroughs,” according to this analysis, especially with island states in the Atlantic. Here, new cooperation agreements with Grenada and also with Cape Verde are touted as a hopeful trend. On the scientific side, it is observed that China conducted its very first scientific studies in the North Atlantic only in 2012 and that forty-six major research missions have been completed in the Atlantic by the end of 2017.

Still, this piece is brazenly forthright about the PLA Navy’s projected future role in the Atlantic. It states proudly that there is an “obvious increase” in Chinese navy forces deploying to the Atlantic. Moreover, China’s “focus of its strategic laydown [战略布局重点]” in the Great Western Ocean—as the Atlantic is literally referred to in Chinese—is projected here to “safeguard maritime legal rights and interests, as well as support peaceful development.” The piece concludes by stating that Beijing’s efforts in the Pacific, the Indian Ocean, and even in the Arctic are dramatically evident, but emphasizes that the exertions in the Atlantic remain “completely insufficient.” That paucity of effort, moreover, is said to not comport with the eminent role of the Atlantic in overall global maritime strategy. The piece closes with the emphatic statement that China must “develop China’s exterior strategic line and break the American maritime blockade [发展中国海洋外线战略打破美国海上封锁].”

Readers will recognize that same phrase (cited almost verbatim in the introduction) from the 2016 Chinese piece, previously analyzed in this forum. There are indeed many similarities between the two analyses on the topic of Chinese strategy in the Atlantic. Still, one may also observe a couple of key differences. First, the second piece is seemingly less apologetic and sensitive about China’s intentions. The 2016 piece had several statements underlining the imperative not to alienate Washington. Such concerns do not really surface in the 2018 piece and there is just one brief mention regarding a positive visit by a PLA Navy squadron to the east coast of the United States back in 2015. A possibly related difference is that the Chinese Coast Guard (CCG) is actually not mentioned in the 2018 piece, while it was repeatedly discussed in the 2016 article. Evidently, a decision seems to have been made in Beijing that the CCG actually will not spearhead Beijing’s push into the Atlantic, implying that this objective lies squarely within PLA Navy responsibilities. Both these differences between the 2016 and 2018 Chinese strategic discussions of the significance of the Atlantic may illustrate that the Cold War with China is growing ever colder.

Many observers will be keen to draw major conclusions from the Chinese research articles cited above. It does seem now almost incontestable to assert that China does actually have global military ambitions. Thus, it is quite conceivable that the PLA Navy may already be operating submarines (armed with land-attack cruise missiles) in the Atlantic. Nevertheless, it remains a leap from the above proposition to assert that Beijing actually seeks global military dominance or even “global hegemony.” That latter proposition certainly remains a highly tenuous projection, at least for now. Indeed, one interpretation of the above Chinese assertions holds that Beijing’s naval strategists are simply seeking to apply American naval strategic concepts against America itself.