There Are High Expectations for the New Abrams Tanks 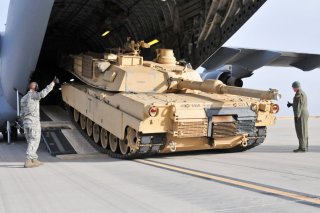 ​Here's What You Need to Know: The arrival of the v4 is further proof that while the Abrams tank may have first emerged in the 1980s, the platform has been upgraded so extensively that it is now an entirely different vehicle.

The Army is now building its first prototype of an upgraded next-generation variant of its Abrams tank, indicating that the service is pursuing a long-term vision for the venerable combat platform.

The M1A2 SEP v4 variant incorporates a series of transformative upgrades to ensure the tank’s continued combat performance. Some information on v4 upgrades is not available for security reasons. But many adjustments are related to sensor technologies, said Brig. Gen. Glenn Dean, Program Executive Officer, Ground Combat Vehicles, Office of the Assistant Secretary of the Army, Acquisition, Logistics and Technology.

“This is the first prototype and it will go through a wide range of testing,” Dean said. “We have multiple prototypes we have to build, so it will be a number of years before it will see the field. The first prototype is being built right now and it should be ready in about the June (2022) timeframe.”

Other v4 innovations include new color camera adaptation, laser rangefinder technology, meteorological sensors, and fire-control or weapons sights improvements. Onboard networking will also be heavily emphasized; the v4 variant will have a new Ethernet switch to streamline information flow throughout the vehicle. This will improve information flow and reduce the hardware footprint.

Along with other modern tanks such as the recently-introduced v3 Abrams tank, the v4 will fire an advanced kind of ammunition called an Advanced Multi-Purpose (AMP) round. The AMP is an advanced ammunition technology that enables tank crews to pick and adjust a specific blast effect from a single round. For example, High Explosive Anti-Tank rounds, Multi-Purpose Anti-Tank ammunition, or fragmenting canister rounds can be used to attack dismounted fighters on the move and a penetration round. This is made possible through a variable fuse, ammunition data link, and airburst technology.

The arrival of the v4 is further proof that while the Abrams tank may have first emerged in the 1980s, the platform has been upgraded so extensively that it is now an entirely different vehicle. The computing, electronics, targeting technology, armor protections, and sensors are generations beyond anything from the 1980s. The prevailing consensus among Army weapons developers seems to be that the Abrams can remain superior for many years to come and that heavy armor is here to stay