There Is Only One Way Donald Trump Can Postpone the Election 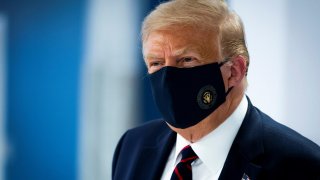 Several days ago, President Donald Trump tweeted this: "With Universal Mail-In Voting (not Absentee Voting, which is good), 2020 will be the most INACCURATE & FRAUDULENT Election in history. It will be a great embarrassment to the USA. Delay the Election until people can properly, securely and safely vote???"

To state what should be obvious, especially to someone who has taken an oath to preserve, protect, and defend the Constitution of the United States:

-Under Section 1 of the Twentieth Amendment to the U.S. Constitution, the President’s term ends at noon on January 20, 2021. The President cannot himself extend this term, nor may Congress by legislation extend it. “Emergency” doesn’t matter.

-Under the Constitution, Congress can set the date of the election by law. It has chosen to set it on the Tuesday following the first Monday in November. Changing this to, say, the equivalent date in December would require legislation to which both Houses of Congress, including the Democratic House, would have to agree.

-Unless Congress chooses to prescribe through legislation the details of questions like mail‐​in balloting, states are broadly free to set their own procedures. Any national mandate of this sort would require legislation to which both Houses of Congress, including the Democratic House, would have to agree.

Short of the enactment of a constitutional amendment between now and then, the term of office for which Trump was elected will expire on January 20, and unless he has won an election occurring between now and then, he will cease to be President. Short of legislation with bipartisan support, the date of the election will remain November 3rd, and states will be in charge of setting election procedures on topics on which Congress has not spoken.

The United States held a national campaign and election during the deadly 1918–19 flu pandemic, a more lethal one than we face currently.

And we will be having an election on November 3, 2020 to decide whether President Donald Trump is to have a second term, whether he likes it or not.

This article by Walter Olson first appeared in CATO on July 30, 2020.