There's a 90% Chance of a Successful Coronavirus Vaccine: Experts 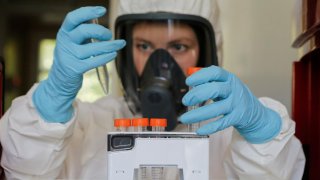 Two of Australia’s leading experts on the Covid-19 pandemic say there’s a very good chance a vaccine will be developed for the disease but there will be huge challenges to overcome until then, and in rolling out that vaccine to the entire world.

‘Just because of the level of focus and resources and effort that’s being undergone at the moment, I think it’s very likely we’ll see vaccines’, Professor MacIntyre told journalist Stan Grant.

‘How good they will be, I don’t know. They’ll probably be okay. I think that we’ll have vaccines that are reasonable enough to provide herd immunity.’

Also speaking at the event was former head of Australia’s health department and ASPI council member Jane Halton, who said that she’s cautious in her optimism but some trials are showing promise.

‘There are over 250 groups working on a vaccine. It’s a big number, but most importantly, there are well over 20 candidate vaccines that are currently in human trial around the world, and more in preclinical work. And we know that the early signs on a number of those are quite positive.’

The good signs don’t mean there won’t be challenges in distributing a successful vaccine to all those who need it, and it would be at least 18 months before a large number of doses would be available.

Because two billion people—the elderly and immunocompromised, and emergency and healthcare workers—would need to be vaccinated to significantly reduce mortality from the virus, ‘we’re talking late next year and into the year following’, Halton said.

That timeframe means the world is going to have to learn to live with the virus for some time to come, even if a vaccine is found soon.

On news that Russia has given its ‘Sputnik V’ vaccine regulatory approval after two months of clinical trials, Halton said she would not be comfortable taking a vaccine that had not finished phase three trials, which usually involve thousands of people, and MacIntyre said seeing the data—which Russia hasn’t released—would be essential in examining its efficacy.

There’s a risk that in the race to be first with an effective inoculation, some countries will cut corners simply because the payoff is set to be so big.

Halton described the current situation as an arms race, ‘because what you’re looking for is the opportunity to use a product for strategic advantage.

‘The strategic advantage that comes with being able to say to potentially a smaller country, “We can help you. We can look after your needs here, but there are strings attached.” I think that is a very real risk.’

There are direct downsides to such an approach of potential coercion and inequitable access, but there are indirect ones that mean it’s actually in a nation’s self-interest to ensure as many people as possible can be inoculated as quickly as possible.

As Halton puts it, ‘In the end, it’s better that we control the disease globally for everyone. Because as long as it’s uncontrolled in the world, it’ll always continue to cause a problem for every country.’

And even with a global upsurge in nationalism, she says that same self-interest may also drive countries to work together to produce candidate vaccines.

‘At the moment as yet, and I’m discounting the Russian announcement, nobody actually has a viable vaccine. Which means there’s an argument for countries to collaborate, because at the end of the day, do you take a bet on one or two and possibly miss out? Or do you work in a collaborative mechanism to actually make sure that you have access to something that will work?’

What do those countries have in common? They ramped up their testing and tracing capabilities to a large degree and did so quickly, many of them with the aid of digital contact tracing to keep on top of any outbreaks.

Halton told Grant there has also been a noticeable difference in response ‘in the countries that actually had SARS as opposed to the countries that watched SARS’ and that ‘a level of trust, a level of empathy and a capacity to explain what is going on and why things are necessary has been a standout feature of some of those countries’ leadership’.

MacIntyre adds that she has been surprised by the failure of the US to bring the pandemic to heel.

‘It’s really shocked me. That was so unexpected that they would be really struggling so badly with controlling this pandemic and the failures have been at multiple levels.

‘It’s just been shocking and tragic really to see a great country that has all the resources to have done a magnificent job, just do exactly the opposite’, she said.

Both experts agree that a large part of the problem in the US was the failure to recognise the seriousness of the pandemic and to increase testing capacity in response.

Even from the level of pure national self-interest, the best way out of this pandemic is likely to be through global cooperation and collaboration.

This article by Jack Norton first appeared in The Strategist on August 14, 2020.

Image: A scientist works inside a laboratory of the Gamaleya Research Institute of Epidemiology and Microbiology during the production and laboratory testing of a vaccine against thecoronavirus disease (COVID-19), in Moscow, Russia August 6, 2020. Picture taken August 6, 2020. The Russian Direct Investment Fund (RDIF)/Handout via REUTERS.