There's No Such Thing As a Naval "Chokepoint" 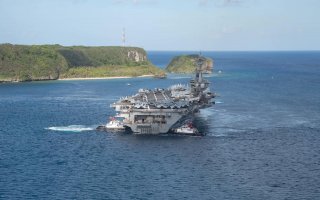 Naval theorist Milan Vego opens a chapter on chokepoint control with a quote from British Admiral Sir John Fisher, who stated that there are “five keys to the world. The Strait of Dover, the Straits of Gibraltar, the Suez Canal, the Straits of Malacca, and the Cape of Good Hope. And every one one of these keys we hold.”1 Fisher spoke from an Anglo-centric view, but his point is evident that control of key chokepoints equated to control of national strategic interests. But a century later, with the technological advances in weapons and sensors, and the interconnectedness of the global economy, can such a claim be made today?

There are over 100 straits where international interest in the free flow of trade transcends the interests of the nearby littoral states. Not all of these maritime chokepoints are of equal importance. Military strategists often speak as Fisher did of strategic chokepoints, believing them to have significant geopolitical value and act as epicenters for maritime strategy, where the control of which is considered vital for success in maritime conflict. But are these chokepoints truly strategic? Does the success of a nation’s maritime strategy actually hinge on the control or loss of control of these narrow seas?

Perhaps the strategic value of any given chokepoint is overstated because the ability to truly “control” these chokepoints is significantly degraded in the current maritime threat environment. The focus should instead be placed on strategic seas, and not the connectors between them.

Before scuttling the idea of strategic straits, there should be a common understanding of the difference between the strategic and operational importance of maritime geography. Maritime strategy is the science and art of using all naval and non-naval sources of power at sea in support of the national military strategy, with military strategy being “the art and science of using or threatening to use military power to accomplish the political interests of a nation…”2 The 2018 National Defense Strategy calls for:

“A more lethal, resilient, and rapidly innovating Joint Force, combined with a robust constellation of allies and partners, will sustain American influence and ensure favorable balances of power that safeguard the free and open international order. Collectively, our force posture, alliance, and partnership architecture, and Department modernization will provide the capabilities and agility required to prevail in conflict and preserve peace through strength.”3

The focus on lethality, resilience, and lethality within an alliance and partnership architecture, combined with “lethal, agile, and resilient force posture and employment,”4 and “a global strategic environment [which] demands increased strategic flexibility and freedom of action,”5 indicate that fixed geographic positions like chokepoints have reduced strategic relevance in U.S. strategy.

The control of chokepoints has long been a primary way to control access to a given body of water. Revisiting Fisher’s assertion that there were five keys to the world, control of key straits meant control of the flow of global maritime traffic and, therefore, the strategic interest of most maritime nations. Warships and merchantmen during the age of sail depended on the prevailing winds for reliable propulsion and shore bases for routine resupply. These trade winds and shore bases funneled ships through specific shipping lanes, many of which transited the key chokepoints Fisher identified. Since transit of these chokepoints was essential, controlling them guaranteed control of merchant shipping and warship movement.

The emergence of steam propulsion removed reliance on the trade winds, but increased dependence on the shore bases that had been established in the age of sail, which were starting to serve as coaling stations. Thus, in Admiral Fisher’s time, his assertion was correct. But since World War II, dependence on shore basing for resupply has diminished. The U.S. Navy perfected at-sea replenishment during World War II, and merchantmen have significantly increased their unrefueled range, both of which reduced the reliance on shore stations and subsequent dependence on specific shipping lanes.

Chokepoints simplify several operational and tactical aspects of naval warfare by concentrating forces. This, in turn, limits the challenges of scouting and screening, because less sea space must be scouted and screened. The avenues of approach to the chokepoint are limited, so the party that controls the chokepoint can concentrate forces or make better use of limited forces available.

Admiral Tōgō Heihachirō’s defeat of Russia’s Second Pacific Squadron at the Tsushima Strait demonstrates how chokepoints simplify scouting. Togo did not know when the Russian fleet would arrive, nor did he wish to search for it in the open ocean. But he did know that the Russian fleet had to pass through the Tsushima Strait to reach its base at Vladivostok. This allowed Togo to concentrate his scouting force of cruisers in the strait and consolidate his battle line inside the Sea of Japan. But what if the Russians had entered the Sea of Japan through the La Pérouse Strait, Tsugaru Strait, or Strait of Tartary? In the 1890s, the limitations of coal-fired steam plants meant that traveling the extra 1000 or more miles without a coaling station made the Tsushima Strait the only choice. Today, however, at-sea logistics provide naval forces greater flexibility in entering strategic seas.

Historically, chokepoints held strategic military value partly because they forced ships to transit within range of the weapons and sensors posted there, and made movements more predictable. Into the second decade of the twentieth century, optical sensors and coastal guns limited that range to or just beyond the horizon. Technological advances over the intervening century expanded that range immensely. First, aircraft extended scouting range, then, as aircraft improved, expanded the striking range of weapons well beyond the chokepoint’s horizon. The introduction of radar further enhanced scouting and early-warning capabilities, and space-based surveillance now allows for the searching of vast ocean areas independent of geographic chokepoints. The missile age added over-the-horizon, ship-killing weapons, with anti-ship ballistic missiles (ASBM) marking the ultimate long-range strike capability.

Holding a chokepoint serves two fundamental purposes, one rooted in sea control and the other in sea denial. The sea denial case, often a strategy of the weaker navy, holds that by controlling the chokepoint, an adversary cannot access the seas on its opposite side. As Vego points out, this is often part of a larger, major defensive joint/combined operation and maybe one of several elements of a national defensive strategy to either bottle up an opponent’s naval force in its own narrow seas, or prevent an opponent’s naval force from entering a narrow sea where it could threaten the defending nation’s territory.7 In the sea control case, control of the chokepoint theoretically allows one to use their naval forces at the time and manner of their choosing within the chokepoint and in the seas controlled by the strait. That is to say, if a nation controls a chokepoint, naval forces and maritime trade can pass through that chokepoint freely at the discretion of the nation that controls it.8

In the current maritime threat environment, controlling the land and water in the vicinity of the chokepoint no longer represents the exclusive manner to control it. The focus on strategic chokepoints may have held when the range of weapons was barely over the horizon, but today an adversary no longer has to control the geographic entrance to strategically important seas to deny their use. Space-based sensors and long-range missile firepower allow an adversary to effectively close, or at least threaten closure of, geographic chokepoints without the traditional need to hold the immediate surrounding land or seas. “Holding” a geographic chokepoint no longer guarantees the use of the seas on either side, nor does it ensure safe passage through the chokepoint itself. Therefore, the U.S. Navy would be better served to focus more broadly on its ability to control or deny strategic seas than the strategic chokepoints of ages past.

Another element that gives a chokepoint strategic value is the volume of trade transiting the strait. Traditionally, blockades and maritime trade warfare have used control of chokepoints to great strategic effect. Britain’s control of the Dover Straits, combined with the North Sea Mine Barrage, closed all maritime trade to Germany during World War I and contributed to the fall of the Kaiser’s government in 1918. During World War II, the failure of the Axis powers to seize the Suez allowed Great Britain to continue using the canal for resupply of its empire. Would such action have the same strategic effects today?