These 10 Glorious Guns Changed the Face of the Battlefield 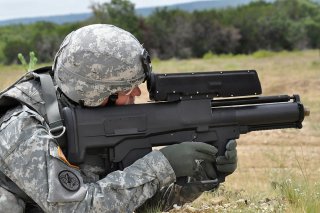 Here’s What You Need to Remember: From the legendary M1 Garand to today’s M4 and M16 rifles, standard-issue infantry rifles have been the ubiquitous icons of the troops who carried them. But throughout America’s wars, some decidedly non-standard small arms have been put into service when a particular situation or circumstance calls for a unique weapon.

This World War II weapon originated not from American arms designers or military ordnance boards, but from the creative minds of a few Marines from the 5th Marine Division. Using salvaged versions the aircraft mounted version of the Browning M1919 machine gun called the ANM2 (pictured above), the Stinger was constructed using an M1 carbine stock, a simple trigger, a Browning automatic rifle bipod, and an improvised 100-round box magazine. Because it was based off the ANM2, the Stinger’s rate of fire was over 1200 rounds per minute, three times that of the normal M1919. It was truly devastating firepower in a infantry-portable package. One Marine, Cpl. Tony Stein, would demonstrate the Stinger’s effectiveness during the Iwo Jima landings on Feb. 19, 1945.

During the initial amphibious assault, Stein single handedly used his Stinger to suppress and assault multiple enemy pillboxes. Shedding his boots and helmet to move faster, Stein made eight trips back and forth across the beach, retrieving more ammunition and evacuating the wounded. For his actions with the Stinger, Stein was award the Medal of Honor, which he received posthumously after being killed in action on Mar. 1.

The Stinger was a rare weapon; only six were ever made, and no surviving examples exist today. But is was a testament to the ingenuity of crafty and creative enlisted troops who wanted to get new capabilities out of their small arms. The Stinger also foreshadowed the concept of the medium or general purpose machine gun, exemplified today in weapons like the 7.62x51mm M240 machine gun.

While it may seem like a Buck Rogers sci-fi prop, this weapon system was ahead of its time. It originated as an protype late in World War II. Provisionally called the T3, the system consisted of early versions of an image intensification scope and infrared illuminator mounted on a custom-built M2 carbine and powered by an external backpack battery. Several T3s served during the invasion of Okinawa, inflicting a significant number of casualties on the Japanese forces, and was effective against night infiltrations of American lines. After the war, an improved version that could be mounted on standard M1 and M2 carbines using a conversion kit was developed. Type classified the M3, it also sported improved optics, increasing the view range to 125 yards. M3s also saw use in the Korean War, but the M3 never was popular with troops; the heavy battery pack, fragile electronics, and the underpowered .30 caliber round didn’t sell troops to the idea of turning a six-pound rifle into a 34-pound monster. But the M3 demonstrated the potential of a night-fighting weapon, setting the stage for today’s infrared and thermal optics systems.

The RPD machine gun is normally associated with the of the early Soviet military and various third-world arsenals. Nevertheless, the weapons got some unconventional modifications from an unconventional American unit. During the Vietnam War, Military Assistance Command, Vietnam established a “black” special operations group under the innocuous sounding designation of Studies and Observation Group; the new unit consisted of Army Special Forces, Navy SEALs, and Marine Force Reconnaissance personnel. In 1965 and 1966, this unit was given permission to begin cross border operations into Laos and Cambodia, with the objective of observing and interdicting logical operations on the Ho Chi Minh trail. Given the covert nature of their missions, SOG operators often carried non-U.S. weapons into the field.

The RPD was a gas piston-operated machine developed at the tail end of World War II by Soviet small arms designer Vasily Degtyaryov. It was chambered in the same 7.62x39mm intermediate rifle as the famous AK-47. Given its place in Vietcong and North Vietnamese hands, the RPD was suited for SOG’s unconventional needs, but went a step beyond. SOG operators cutthe RPD’s barrel down to the end of the gas tube and shortened the stock, bringing the overall length down to just 31 inches. SOG also modified the RPD’s drum magazine to hold 125 rounds instead of the usual 100, as well as adding a piece of linoleum to muffle rattling inside the drum. These modifications created a compact, yet still controllable machine gun that only weighed 12 pounds. For a small, outnumbered SOG recon team trying to break contact with pursuing forces, the custom RPD was the last word in portable firepower.

What they got was a cross between a grenade launcher and a shotgun; the user cycled new rounds into the chamber like a pump-action shotgun. Never given an official designation, the weapon was named after the China Lake Naval Weapons Center where it was developed. The China Lake carried three 40 mm grenade rounds in the shotgun-style magazine tube, plus one in the chamber. With the China Lake, SEAL teams could deliver multiple frag grenades in a matter of second, well suited for conducting ambushes and destroying enemy fighting positions. Despite its quality, the China Lake never quite evolved past the experimental phase; revolver-style grenade launchers offered more ammo capacity than the shotgun design. But the role of the China Lake endures in weapons like the M32 Multi-Grenade Launcher, providing a rain of explosives at a moment’s notice.

This weapon system came from legendary American arms designer Eugene Stoner, creator of the original Armalite AR-15 rifle, which was later adopted by the military as the M16. Stoner’s next project after leaving Armalite was a modular weapon system developed with Cadillac Gage: a 7.62×51 mm caliber weapon that could be configured as a rifle, carbine, or machine gun. When Stoner and his design team saw the growing popularity of the 5.56 x 45 mm caliber, they switched away from the heavier 7.62 mm round.

The Stoner 63 system featured a variety of different subassemblies, that enabled a variety of configurations. A full-size rifle, a compact carbine, even a solenoid-fired vehicle machine gun were available. But the most popular version of the Stoner 63 was the light machine gun. Special operations units like the SEALs and Marine Force Reconnaissance prized the 63’s light weight — it was 11 pounds lighter than the standard M60 machine gun. The weapon’s 5.56 mm caliber was also significantly more controllable than the heavier 7.62 rounds of the M60.

The Stoner 63 family got attention from the Marine Corps, which conducted testing with the various configurations from 1963 to 1967. It got positive reviews in boot camp training environments and performed well in limited combat trials. But the Army disagreed, with Army Weapons Command electing to stick with the M16.

While the SEALs had an appreciation for the weapon, its complicated assembly and fussy maintenance requirements meant that it would never see wide acceptance outside special operations circles. But its modular design was a revolutionary approach to small arms design, one that would ironically be best exemplified in improved versions of Stoner’s previous work on the AR-15. But even modern versions of the AR still don’t offer what the Stoner 63 did back in the 1960s.

This weapon made a brief appearance during Operation Just Cause, the 1989 U.S. invasion of Panama to oust Manuel Noriega. Outwardly similar to the M16 family of rifles, the Colt RO635 uses a blowback operating mechanism rather than the direct gas-impingement system of its 5.56 mm brethren. Introduced in 1982 and chambered for the popular NATO standard handgun caliber of 9×19 mm, the RO635 accepts modified magazines similar to that of the Israeli Uzi submachine gun. Compared to the other submachine guns of the day, the RO635 is more accurate in full automatic fire due to its closed bolt design. The weapon was adopted in limited numbers by the Marine Corps in 1985, and members of the Marine Fleet Antiterrorism Security Team carried it during combat in Panama.

Despite its limited use, the RO635 proved that the AR-15 design could be adapted to other roles and calibers, taking advantage of the platform’s good ergonomics and easy-to-manipulate fire controls. It also foreshadowed the huge influence the AR-style rifle would have on future designs with both civilian and military weapons developing into alternative calibers and configurations while mimicking the same basic design elements of the original AR-15.