These 5 Bombers Ruled the Skies 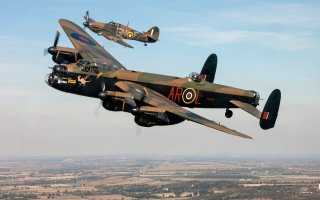 Here's What You Need to Know: The very best aircraft have been those that could not only conduct their primary mission effectively, but that were also sufficiently flexible to perform other tasks that might be asked of them. The last big, manned bomber may be the American LRS-B, assuming that project ever gets off the ground.

Although the bomb load of the Mosquito was limited, its great speed, combined with sophisticated instrumentation, allowed it to deliver ordnance with more precision than most other bombers. During the war, the RAF used Mosquitoes for various precision attacks against high-value targets, including German government installations and V weapon launching sites. As pathfinders, Mosquitoes flew point on bomber formations, leading nighttime bombing raids that might otherwise have missed their targets. Mosquitos also served in a diversionary role, distracting German night fighters from the streams of Halifaxes and Lancasters striking urban areas.

The exception was the B-52. The BUFF was originally intended for high-altitude penetration bombing into the Soviet Union. It replaced the B-36 and the B-47, the former too slow and vulnerable to continue in the nuclear strike mission, and the latter too short-legged to reach the USSR from U.S. bases. Slated for replacement by the B-58 and the B-70, the B-52 survived because it was versatile enough to shift to low altitude penetration after the increasing sophistication of Soviet SAMs made the high altitude mission suicidal.